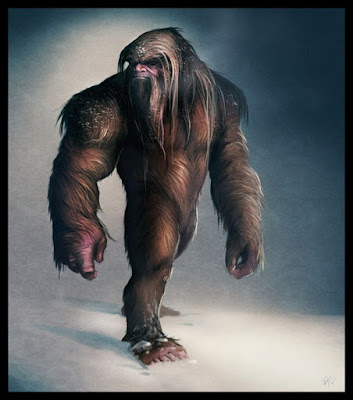 The Mogollon Monster is a nickname given to a bigfoot type creature that has been spotted in and around an area known as the Mogollon Rim in Arizona. Sightings of the creature date back as far as 1903, and maybe even further.

In 1903, I.W. Stevens told the The Arizona Republican newspaper that he came across an unknown creature near the Grand Canyon. Stevens described the creature (which he called “the wild man of the rocks”) as having long and matted white hair on its head and a long white matted beard that grew down to its knees. It also appeared to have gray hair covering a majority of its body. He came upon it while it was kneeling over a recently killed cougar and eating the meat of the dead animal. Even though Stevens reported being extremely still and quiet while watching the creature, it appears that creature became well aware of his presence when it quickly turned, locked eyes onto Stevens and let out “the wildest, most unearthly screech you could imagine.” This display of anger from the creature caused Stevens to take off out of the canyon and head for the safety of home.

The range in which the monster was first sighted is known as the Mogollon Rim, and it is this location that had given the creature its new name, The Mogollon Monster. But the creature appears to travel and has been sighted around Prescott, Williams, Alpine, and Clifton Arizona. The majority of the sightings occur in the Ponderosa pine forests of the area. Sightings of the ape-man like creatures are reported as going back to the early 1800’s when settlers of the area started having run ins with the monster in the canyons and forests of the region. Local Native Americans within the region have also long told stories about big hairy men who lived within the forests and canyons. But one of the biggest reports of the monster comes from the mid-1940’s encounter during an overnight Boy Scout trip.

Don Davis (who would go on to become a Cryptozoologist) was 13yrs old at the time of the encounter and a member of the scout troop that was camping. Davis stated that his troop were camping near Tonto Creek when something woke him and some other boys up late in the night. It sounded like someone was rummaging around and going through everyone’s stuff. Davis, thinking it was another boy, yelled out for the scout to stop and go back to bed when the intruder stopped and turned in his direction. The unknown visitor approached Davis (who was in his sleeping bag) and stopped above him, standing directly over his sleeping bag. This terrifying unknown creature caused Davis to pull his sleeping bag up over his head and hope the monster would leave him alone. Eventually, the monster lost interest in the scouts makeshift campsite and took off back into the wilderness. Davis reported an extremely strong and terrible odor coming from the creature and described features that many other witnesses have spotted.

The Mogollon Monster is described as standing around 7ft tall and being very large in overall body build. It’s body is covered in black or reddish hair that is noticeably long and matted. The face, hands, chest, and feet appear to be without hair and showing a dark skin tone. The hair of the creatures also appear to turn dark gray as they age. The head is almost “square like” and the eyes are set deep in the skull under a large brow. The upper arms of the creature are said to be very large (appearing to be 6in in diameter) and they hang down to the knees. Like most ape-men sightings, the feet are said to be huge, tracks left by the creature measure around 22in long. It takes gigantic, inhuman strides and sways its arms as it walks, it seems to have no problem with different types of terrain. The odor the creature produces is said to smell like that of a dead fish mixed with a skunk and bad body odor. It also appears to be omnivorous and can be extremely territorial, it is not afraid to aggressively approach people to make them leave its claimed area.