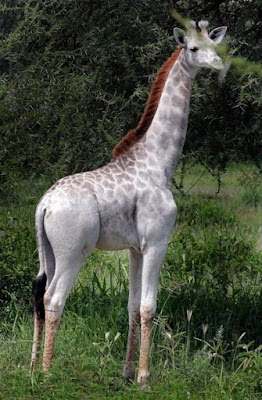 Here's a rare spectacal, almost as rare as the elusive sasquatch. Omo is a giraffe in Tanzania with a genetic condition that makes many of her skin cells incapable of producing pigments. The rare giraffe is not a true albino, but is quite rare none the less.

been seen roaming with her pack around the Tarangire National Park in Tanzania. According to the Daily Mail, ecologist Dr. Derek Lee snapped the photo of the rare white animal with the unusual coloring at the park.

The giraffe, estimated to be about 15 months old, has a genetic condition called leucistic--meaning that "many of the skin cells are incapable of making a pigment but some are, so she is pale - but not pure white with red or blue eyes as a true albino would be."

Unfortunately because of her rare coloring, Dr. Lee says Omo may be a target for poachers that usually hunt adult giraffe for bush meat.

"We and our partners are working on giraffe conservation and anti-poaching to help give Omo and her relatives a better chance of survival."