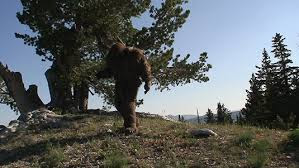 So bud who was a deputy sheriff at the time and patsy his wife went camping up near flaming gorge on the Utah Wyoming boarder. There were no other campers in the area. The first night was uneventful.

On the second morning Patsy got up before dark to go the bathroom as there camper had no toilet.

They had a port a potty set up close to camp , when Patsy was finished she was tying up the bag when she heard Low huff as she looked up she swore she saw a head behind a tree , she noticed the long hair more than anything, so she hurried back to the camper ( it was almost a full moon ) .

Bigfoot Encounter!
Patsy woke Bud up and told him she swore there was a very tall homeless man watching her, Bud chuckled and said Patsy we are miles from anyone, Patsy told Bud that the man smelled awful.

Bud blew it off and they started there day as they was leaving to go fishing the bag that Patsy had left by the fire pit was now on the good of their truck, Patsy advised Rick that she had placed the bag by the fire pit, Bud was now a little suspicious but not wanting to miss the early morning fishing they left.

They got home around 5 pm from the lake and Patsy began preparing dinner , after dinner it was just starting to get dark more like dusk , Bud was lighting the lanterns when he heard a large tree 75 yards away crash to the ground, Bud told Patsy and their son to go into the camper Bud follows them in and took his.

357 and returned outside, he walked over to the tree he noticed an odor and a huge set if barefoot tracks I guess this really made him nervous , Bud was a big man he stood 6.1 and weighed 260 and I compare him to John Wayne as he was awnrey and didn’t take any guff.

So he went back to tell Patsy that it was nothing, he didn’t want to upset her.

Later that night around 1 am there son woke them and said that something was brushing up against the camper I guess they was so tired they put the son in bed with them, 30 minuets or so they woke to a scream that went through there soul I’m told.

Patsy said that is it let’s get out of here, Bud took his pistol out with a lantern and found nothing.

To get through this story fast few things was missing in camp like his lantern and his pole was broke the next morning – later that night was the worst night – approx. 11:30 just before midnight the camper shook violently this is unclear if the door was unlocked or if Bigfoot pried the door open but suddenly the door was open and there stood at least a 8 and a 1/2 foot creature – Patsy screamed and their son jumped off the lower bunk and ran toward them Bud fumbled for his pistol, a lot of commotion was happening Bud said – there son was crying and screaming for life Patsy was in the line of fire so no shot was fired .

The Sasquatch just stared at them the huffed and left. They told my folks that time stood still but it was probably less than 2 minutes that Bigfoot was in there view. Bud did get to the door and he could here the Sasquatch crashing through the trees…

The camper had to be welded and a new door frame had to be constructed. Very costly. Patsy swears that she heard these screams in here dreams for years and years…

I personally over heard my parents talking to Bud and Patsy when we was camping in the Uintah’s – we camped a lot and I was always scared to death because my bunk was close to the door, this story has stayed in my mind my entire life.