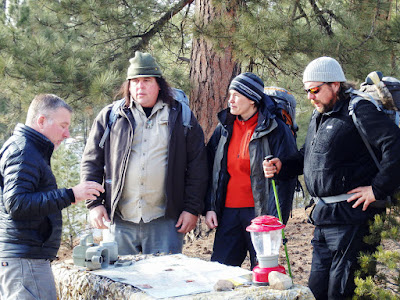 Locating the Finding Bigfoot team is almost as hard as, well, finding bigfoot. Luckily for us, they also seem to make the news whenever they are spotted. Early last spring the team set their eyes on New Hampshire, and finally, the fruits of their effort will be revealed. The New Hampshire episode will be airing January 17th, 2016.

Animal Planet's "Finding Bigfoot" team — consisting of Bigfoot Field Research Organization President Matt Moneymaker, researchers James "Bobo" Fay and Cliff Barackman, and field biologist Ranae Holland are known for traveling the world in hopes of, once and for all, proving that Bigfoot (aka Sasquatch) is real.

The crew bases its searches on information gleaned from their town hall meetings, where locals share their experiences.

During the Bretton Woods meeting, the crew heard a number of Bigfoot stories and looked into some of the cases.

The crew was in New Hampshire from April 7-15.

The Los Angeles-based crew was very impressed with New Hampshire.

"It's awesome," Bobo remarked after the meeting. "It's beautiful, it's actually got real mountains east of the Mississippi."

"In picturesque Mount Washington, concerned resort owners reach out to the team with a slew of reported Sasquatch sightings gathered throughout many years," states an Animal Planet press release about the show.

The new season starts Jan. 3 with a two-hour premiere that compares Sasquatches in Canada and U.S.

On Jan. 10, a show about the crew's trip to the woods of Maine will be aired. The season also includes investigations in Georgia and Oregon.

The show is in its fourth season, but the second season was split into three parts and the third season into two, said producer Sean Mantooth.

Last April, Moneymaker was optimistic about the New Hampshire visit but cautioned that the deep snow might be an obstacle. Ultimately, he was happy with the way things worked out.

"We've heard enough (stories) in the snow that I have a pretty good idea where there are some around," said Moneymaker, adding that he thought getting a sound recording might be possible. "There's a lot of different spots."