News Report About Home In The Ozarks Being Visited By Sasquatch 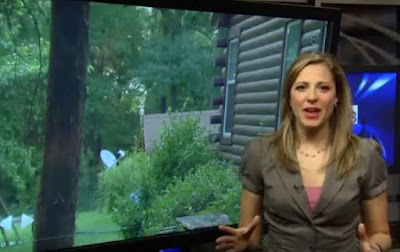 Steve Robinson says bigfoot has been visiting his property for years, and he has the evidence to prove it. Audio, photos of tracks, even a photo of the creature itself. KSPR 33 reports:

FORSYTH, Mo. - Something has been happening at this Ozarks home in Taney County for years.

The owner says it’s Sasquatch that’s been a not-so-welcome guest visiting his family.

"We are easily a mile from the road on the other side of the valley," said witness Steve Robinson. "There is a waterway at the bottom, deer move along there all the time."

It was in the 90’s when Steve Robinson realized that he wasn’t alone on his land outside of Forsyth.

"We have heard coordinated calls from two to sometimes three voices, near slope and far slop including down into the middle," said Robinson. "They will be moving from west to east."

It wasn’t just calls Robinson heard, it was what he saw that made him wonder who or what was crossing his land.

"We found footprints that are anywhere from 12 inches to 17 inches long and all pressed into the leaves," said Robinson.

And he has proof.

“We found a picture about that time from may game camera from here in the corner," said Robinson.

It wasn’t that picture – but Robinson’s face-to-face encounter that convinced him to become a Bigfoot investigator, on his own property.

"In six steps that thing cleared the edge of the property and it was gone," said Robinson.

He now has a collection of photographs and recordings he claims are proof Bigfoot is real.

"The bottom line is they have been here for generations," said Robinson.

And he’s not the only one who’s seen it. The BFRO – the Bigfoot Research Organization is full of reported Bigfoot activity across the Ozarks. You can see the sightings in Missouri and Arkansas on this map – the darker the county, the more reports. Three of them are here in Greene County.

Boles says there’s something here in the Ozarks…

"Missouri has a long history of Bigfoot activity," said Boles. "News reports dating back to the 1800s. The Kansas City State, the New York Times have reports about the 'Wildman' in the Ozarks."

Boles says the reports have stayed consistent over the years, but homeowner Robinson says the activity around his house has calmed down. And he misses his Bigfoot.

"This guy was just a voice in the dark, when he’s gone you feel a little bit like, yeah, he’s part of it, and I would like to see him," said Robinson.