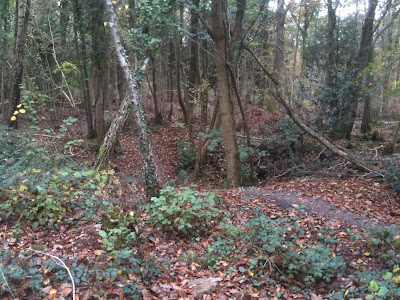 A Bristol man was out walking his dog when he got the shock of his life. Off the trail he observed a bigfoot type creature eating what appeared to be raw meat, and using some small twigs as tools. If that wasn't a big enough surprise, the man claims the creature was also apparently talking to someone or something else out of view.

“I thought it may have been a deer, so I went off the path to look,” he recalls. “This is when I saw this strange ape creature. It was sat in the brambles and it was digging in the earth with a twig.”

Reportedly, the alleged animal was doing this for about 5 minutes, then picked something up and began eating it. Harry believes this was a raw piece of meat.

“Then it got another twig and was picking pieces of meat from its teeth with it.”

But Harry was also aware that the strange-looking being appeared to be “communicating with something”.

“It kept looking left and was talking to something, and I thought I heard movement from where it kept looking. When I say talk it more grunted and squeaked,” he says. “at one point it started doing something with the twigs, crossing them over on top of each other, like he was weaving something. All in all I watched this thing for 25 minutes. It was only when it stood and walked off that I left. It stood up, grabbed a large tree branch and snapped it off quite easily, and it then leaned it against another tree, then it walked off and I never saw it again.”