I found this on the front page of LDS living 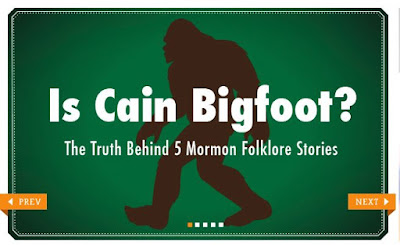 For those who don't know what LDS Living is, it's a Mormon lifestyle website. We were amazed to see Bigfoot on the front page of their premiere website. What we learned just blew us away. Bigfoot is officially a part of Mormon folklore, and some LDS members actually believe that Bigfoot is Cain from the Bible, as explained:

There may be more to fear from Bigfoot than the fact that he’s big and hairy: some say that the legendary North American woodland ape is Cain.

Though there’s no way to prove or disprove this particular tale, knowing the source of the legend can shed some light on why this conclusion has been made. Abraham Smoot recorded the following after early Church Apostle David W. Patten described an encounter he had with Cain in 1835:

As I was riding along the road on my mule I suddenly noticed a very strange person walking beside me. . . . His head was about even with my shoulders as I sat in my saddle. He wore no clothing, but was covered with hair. His skin was very dark. I asked him where he dwelt and he replied that he had no home, that he was a wanderer in the earth and traveled to and fro. He said he was a very miserable creature, . . . and his mission was to destroy the souls of men.

This entry was included in Spencer W. Kimball’s The Miracle of Forgiveness, which was originally published in 1969. In 1980, sightings of the legendary Bigfoot were reported in South Weber, Utah. Members made connection with these sightings to Patten’s story of Cain, effectively beginning the tale. Reeve believes Mormons use this story to connect an unexplainable event with proof that the Saints are doing a good job. “When Satan sends Cain against Mormons, . . . they think, ‘we must be on the right path, or Satan wouldn’t bother sending in his most evil hordes against us.’”