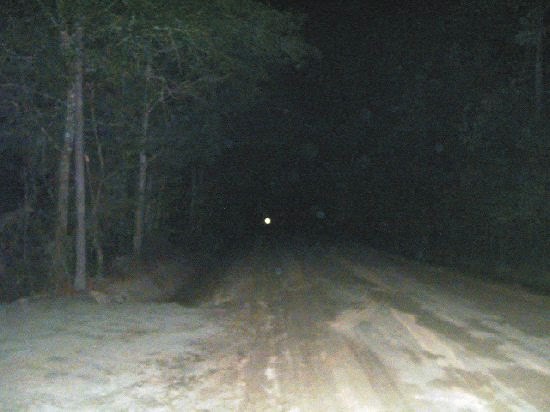 The Bragg Road light is a mysterious light that appears at night on a road in Southeast Texas. Known as a "spook light" no one is quite sure what causes this phenomenon. A Native American woman and her young niece claim to have seen the source of the light however. They claim they saw a headless apparition carrying a glowing green lantern. Which would certainly freak me out.

Suddenly, she explained, she noticed a “dense green light” coming from the distance and “slowly moving” toward them.

“We were looking South. I adjusted my glasses to my face and closed my eyes, then opened them again. I could make out that it was an apparition of a man, dressed in overalls, like an old timey train worker. He was carrying a lantern in his right hand that was glowing green,” said Celestine. “I didn’t pay any attention to what kind of footwear, if any, that he was wearing, because I was too shook up to say anything. I glanced over at Mikayla, and she was frozen with fright, her little eyes as big as saucers. The main reason neither of us could speak is because he didn’t have a head on his shoulders!”

The “entity” reportedly walked about 12 feet before vanishing into thin air.