Woman Captured by Bigfoot to Take Care of Sick Youngster 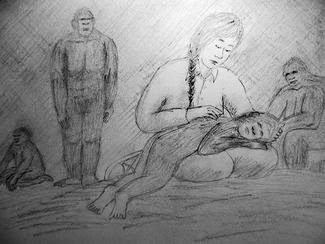 This is a strange story told by Norma Cobb in her book "Arctic Homestead". The story originates from Alaska, and tells of a woman who was captured by bigfoot, and taken to their home to take care of a young bigfoot that was sick.

In the interior of Alaska, the Hairy Man is known as the “Bushman”. There was an elderly woman who was known as a medicine woman because of her experience as a young girl.

She was out picking berries with others near Rampart when she was kidnapped by a Bushman. She was taken into the wilderness and brought to a cave, where she saw other members of the Hairy Man’s family or group.

In that cave, there were both male and female Hairy Man people, and even young ones. They were hairy and wore no clothes, and smelled badly. But one of the babies of the Hairy Man people was very sick.

Then she learned somehow that she had been taken and brought to the Bushman’s cave to help take care of the sick baby. They spoke to her without talking. She learned the Hairy Man people thought a human would help make the baby well, and that was why they took her.