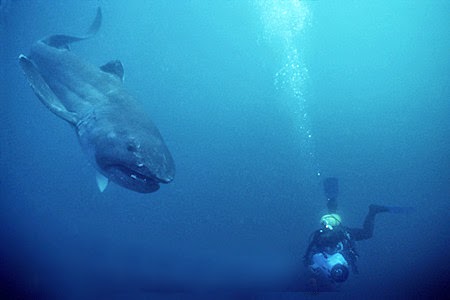 An extremely rare megamouth shark was caught off the coast of Japan last month, and is drawing a lot of attention. The species was only discovered in the 1970's, and less than 60 have ever been seen. They normally stay in deepest part of the oceans, but occasionally come into the shallows to feed. Recently it was discovered that they actually have a reflective lining in their mouth that may lure prey to its death.

A very rare shark is attracting quite bit of attention in Japan. The Megamouth shark was caught last month and locals are flocking to it to catch a glimpse.

The shark was pulled from the waters off Shizuoka. Now the creature is in the hands of staffers at the Marine Science Museum in Shizuoka City.

Given the uncommon sight, its no surprise people are curious.

Megamouths are one of the rarest species of sharks. They were first recorded in the mid 1970s. On average, the sharks measure about 16 and a half feet in length.

They have gigantic heads and mouths that contain roughly 50 rows of tiny, hooked teeth. As for the female Megamouth in Japan, she measured 13 feet long and weighed about 15 hundred pounds.

The shark has since been dissected by staff at the museum. A crowd of around 15 hundred people gathered around to watch.

This Megamouth makes the sighting count reach 58. That means over the course of not even 40 years, less than 60 Megamouths have been spotted by humans.