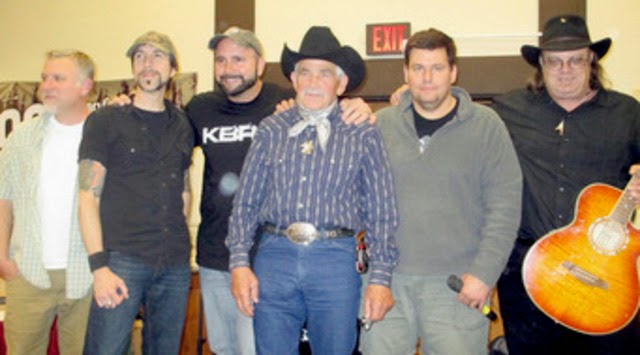 The annual Ohio Bigfoot Conference is probably the biggest bigfoot conference in the World, and for anyone who attends, it does not disappoint. Lots of famous bigfooters take part in the yearly event, and it's a place for researchers and enthusiasts to meet some of the big names in research. Can you name the members of this motley crew pictured above?

"Bob Gimlin spoke of the events leading he and the late Roger Patterson into the Bluff Creek area of California where, in October 1967, while rounding a downed tree, they encountered a female creature. Patterson would film about a minute of footage before his film supply ran out.

The footage is considered by some to be the single greatest evidence of the existence of bigfoot.

Gimlin met Patterson on the rodeo circuit. Patterson asked Gimlin to assist him in his investigations. The two would travel weekends in Gimlin's pickup to remote areas.

Over the Labor Day weekend of 1967, the two headed to Mount Saint Helens, a hot spot of reported sightings. Three weeks later they found themselves at Bluff Creek.

As the creature fled into woods, Gimlin said he wanted to pursue on horseback, but Patterson convinced him otherwise.

They rushed north to mail the film for processing.

"The film didn't impress me at all," Gimlin said.

This is compared to having been an eye witness to the creature, he added.

They would return to the scene with numerous cardboard boxes to protect the tracks they found in the soil. But heavy rains destroyed the boxes as they sat outside the truck (the men slept within). Gimlin improvised, using bark pulled from nearby dead trees to cover the tracks, protecting them from the rain until they could be cast.

The likeness of one of those tracks was crafted into a special framed and lighted box and presented to Gimlin.

Tom Yamarone shared the events leading from the discovery of tracks by Jerry Crew in 1958 along a road bed to the Patterson-Gimlin film of late 1967.

He also performed a couple of songs, one which he co-wrote with "Finding Bigfoot" star James "Bobo" Fay."


Check out the rest of this article by clicking here.