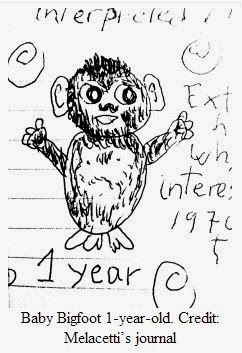 We recently shared a cryptozoologynews.com story about a woman who supposedly raised an orphaned bigfoot. Now a new article has been released stating the woman has come forward with more information. This time details from her personal journal were included. An interesting twist to the story, the bigfoot creature supposedly only had three fingers on each hand, and three toes on each foot.

“I wrote it every day, I drew pictures on it, with the little face and three fingers and three toes only,” she said. “I would write a little note on every little thing he’d do. I remember when I was feeding him the goat milk and he would spit it out!” Melacetti says she is proud of having contributed to the preservation of an “almost extinct” animal."

For the rest of this story, follow this link.