The Sykesville Monster on Destination America 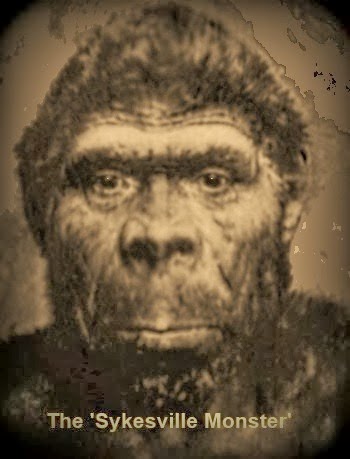 This Friday, February 28th 2014, Destination America's Monsters and Mysteries in America will feature the Sykesville Monster, a bigfoot-like creature from Maryland.

"In a telephone interview this week, Strickler said he was fly-fishing on the Patapsco River May 9, 1981, about a mile downstream of downtown, when the creature was flushed out of the brush on the opposite bank by a stray dog. Strickler said the monster stood up to 8 feet tall and was covered in dark, matted hair everywhere except his face and the pads of his feet. “It was making a ticking sound,” said Strickler, which he took to be the sound of the creature clicking his teeth together. The creature had a strong, musky scent that Strickler said he smelled from about 25 yards away before the creature fled into the woods. “He kind of looked like a Neanderthal,” except for the thick pelt of dark brown hair, Strickler said. “He was definitely male. I could see his genitalia.”

For more details on the show and the monster itself, click here.