Kentucky Man Comes Face-to-Face With Bigfoot and Films It 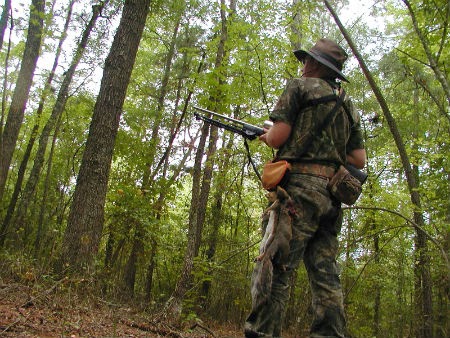 The story you're about to read will piss you off. It's one of those stories that makes you say, WTF?! Rodney A. recently shared a story of his friend's encounter with a Bigfoot in Trimble County, KY. His friend Tom, who's also an investigator, was standing just 50ft away from the Bigfoot, when he managed to grab his cell phone to record the beast before it walked off. Rodney recounts the disheartening story of what happened to the video:

TOM COMES FACE TO FACE WITH A MALE SQUATCH TODAY!!

While wandering through the awful Hell, known as Super Wal-Mart, I receive a frantic call from Tom. He says, "Rodney??" and I can detect that something is not normal with his voice (I did not go with Tom today, as I worked late enough that getting in the woods wasn't an option). "I just got the Shit scared out of me", he says and I ask if something yelled at him. He says, "No, not yell, I saw it standing 50 feet from me!!!" He then goes on to explain that he had found fresh tracks, and was making a video of the prints, which I will post as soon as they get converted down to a reasonable size.

Tom would never joke, or try to hoax me on this, and the fear in his voice was more than enough proof to me, that Tom saw a Bigfoot in our habitation area. Tom detected a rotten smell, and looked up from the prints he was investigating, and to his amazement a large, hairy creature was standing about 50 feet away, and it was looking straight at him. The hair covered it's body, except for the face, and was of a reddish hue.

Tom didn't flex a muscle and looked at the creature, the creature looking directly at him, for about 45 seconds. It then pivoted on it's heel, spun it's body around and began walking away. It did not seem to be in a hurry, which may be a sign that this creature is gaining our trust. Tom grabbed his phone and began recording, and was convinced he had that video we all want. He jumped on the four wheeler and drove out of the area, eager to see his captured video.

Upon arriving at home, Tom's wife can tell he is shaken up. She asks how it went and Tom said ,"You'll have to watch this video and see!" They started to watch it, and low and behold, Tom had accidentally switched the camera around in his haste to record the creature walking away. He recorded his jacket instead, but you can hear the creature walking away through the leaves,

Yes I know, it is disheartening, and I guess it just wasn't meant to be today. The good news is, it revealed itself to Tom, did not make any defensive noises or gestures, and calmly waked away. They are starting to gain our trust. I believe it is just a matter of time until we capture sufficient evidence to quiet the cynics, and prove these creatures are not a myth, but a living, thriving being - one that lives in our backyard.