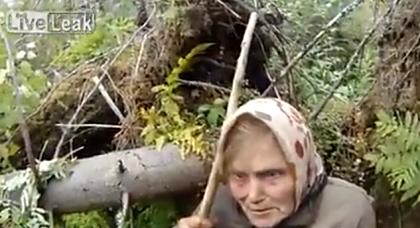 We're not sure how this 77 year-old grandma survived after being lost for 5 days in the woods, but we're convinced that Russians have a super human ability to avoid dying. Here's the story translated via a Russian website:

A woman 77 years old, on Saturday went to pick berries, phoned and said that was lost. Some time she has been in touch. Our groups working the first day 4 and 5 groups in the following days. The terrain is so difficult to pass that the trained groups were moving at a speed of 500 meters per hour.

Heavy and long search-and-rescue efforts had been successful - the lost was found and evacuated to the 6th day after went to the woods.

The statement about the disappearance we received on July 21 in the morning.

the siren was installed In place as a sound beacon. The first time with the missing women was limited telephone contact, able to obtain information about what she hears a siren.

Soon the connection was lost. The terrain was extremely difficulty, solid fallen timber that formed the vast, virtually impassable logjam. Group twice heard the sounds might like the response, but to confirm and localize the response failed.

These searches were checking out more than 35 rescuers.

By day 5 was examined by virtually the entire area, the hope for the success of the search began to disappear.

The discussion of the available information, it was decided to carefully examine the last possible area and in it, on the afternoon of 25.07 could hear her response.

According to the grandma, she slept in the nights . While working siren, she all time tried to go to the siren. Then, the day of the siren was not working, she did not know where to go, but then, heard a female voice called her (that search party worked), she tried to go to voice, but got stuck in fallen timber, and sit down. The next day, the same voices heard and responded, but could not go.

The process of finding and began evacuating captured on video. (camera mounted on the head lifeguard)