The Kids Are Back! Squatch Watchers - Into the Wild 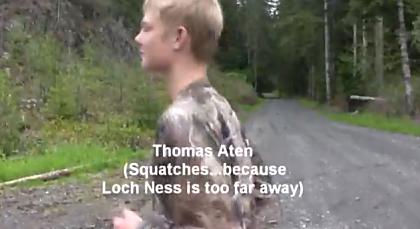 This is the third installment of the Squatch Watchers' quest into the forest of the Pacific Northwest in search of Bigfoot. This video was entirely put together by the students themselves. Check it out:

On this expedition the team travels out into the remote forest of the Pacific Northwest in their search for Bigfoot. Although the exact location of this expedition cannot be released due to the risk of disturbing the Sasquatches' habitat we can tell you that the team is traveling to an area near Lake Sultan. Lake Sultan is located in the Cascade Mountains of Washington State and is a great area for squatching with many water sources, ample food supply, and lots of cover for a Squatch. The team is going to recover and look at the results from the trial camera that was set out during their previous expedition. The team's choice of bait to entice a Sasquatch to come near the trail camera was oranges as the team believes that Sasquatches are a descendent from Giganthopithecus and Orangutans. Both of these primates are known to consume oranges as one of their prime food sources. With this knowledge the team thought putting out oranges would be good bait to lure the Sasquatch in the area and in the process hopefully get a picture.