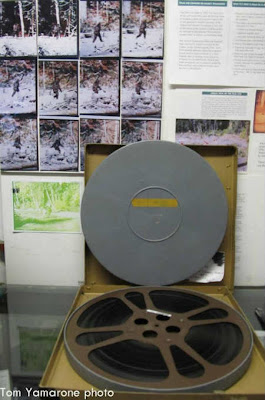 Last September, Mike Rugg received a reel containing video of Roger Patterson talking about his Bigfoot footage. The "Big Reel" gives us a rare glimpse into Roger Patterson's world -- two months after filming the creature at Bluff Creek, CA. The film was used as a marketing tool in the 1970s and was shown to audiences during the height of his career. Patterson had presented it to Universal Studios and the BBC, who were especially impressed with the film.

Rugg, a curator at the Bigfoot Discovery Museum had been working on a documentary featuring the "Big Reel" and was planning to release it on DVD. It now looks like the project has turned into a disaster after disagreements over royalties with Patterson's widow entered the picture. Watch below: