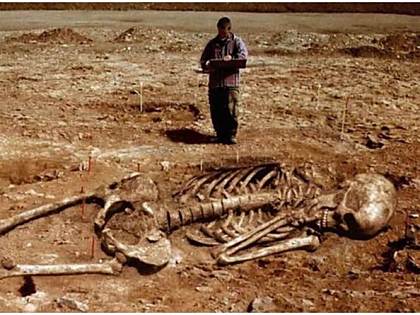 Last December, we discussed the possibility that Dr. Melba Ketchum may be studying "giant skeletons". Giant skeletons have reportedly been found around the world. Critics have criticized Ketchum's Bigfoot DNA study suggesting contamination maybe the reason why her data shows a homo sapiens / unknown hominin hybrid species in North America. In a new Facebook posting, it seems Ketchum has taken the next critical step in proving that there is no contamination -- by extracting DNA from giant bone fragments supposedly from Bigfoot:

"We are working on teeth and bones....can't wait to see if we hit pay dirt so to speak!!! Have a variety of samples...we shall see what we get..... Dr. Pat, my second author is amazing. Even the Armed Forces lab was using his extraction techniques last time I heard (You know, they identify bones from MIAs and other lost servicemen and even identified the person in the Tomb of the Unknown Soldier from the Vietnam War). He taught me the technique, but he has the wonderful robots that make extractions more perfect than I could ever do manually. He has never failed to get DNA from bone. Even manually his techniques are SO fantastic that I was able to get usable DNA from cremated remains in two separate cases (one cat and one human) and I never thought we could do that, especially without robots. We recently extracted DNA from some 2000 year old tissue and hair and got good results (DNA profiles) using these extraction methods without having to amplify the DNA (WGA) or make a "library" like they did for the Neandertal and Denisovan hominins prior to sequencing. We have one sample that is highly degraded bone and it will be interesting if this will be the first time this extraction technique fails. I am betting on getting DNA though. The academics could sure learn a few things from forensic scientists about extracting good DNA from minimal samples and also how to determine if there is really contamination other than just assuming that there is... It is so awesome! I gotta love science!!!!"


Hot off the heels of all the excitement, Ketchum posted the following statement on her personal Facebook page expressing interest in extracting DNA from the Turin Shroud, the famed burial shroud that many Catholics say bears the face of Jesus has been dated back to Christ's time:

"While we are on the subject of Easter, wouldn't I LOVE to get blood sample and therefore a genome from the Shroud! I could die happy after doing this! The paternal side should be nothing less than a miracle if it is real. I know a technique that wouldn't harm the shroud when done property."