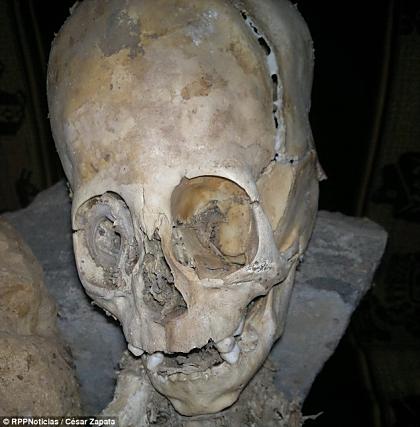 Is the Peruvian mummy a giant toddler? In 2011, the discovery of a strange-shaped skull in Peru led some to claim it is the remains of an ancient baby giant (or an Alien from outer-space) . They argue that a soft spot in the skull -- called an open fontanelle, is a characteristic of children in their first year of life, yet the skull also has two large molars, only found in much older humans. The unidentified creature also has a strangely shaped skull nearly as large as its 20-inch-tall body. The physical evidence corroborate the existence of giants in accounts by early explorers like Magellan and ancient texts like the Babylonian Epic of Gilgamesh, the Hebrew Book of Enoch, and the Book of Giants.

Dr. Melba Ketchum stated last Friday that she's attempting to unlock "history's mysteries" and is currently working on samples from Peruvian mummies. Is it possible that she also has samples from the strange creature found near Cuzco, Peru? Ketchum says she is thinking about raising money to help unlock these types of mysteries:


I am thinking we can raise the research money for an extention to the lab and if so, we will set up a genomics center with a next gen sequencer, bone robots and a good bioinformaticist (I already have one in mind) and we would solve a lot of history's mysteries. There are so many...giants, mummies and others (you can use your imagination). These mysteries fascinate me and it is not difficult to do. A lab geared to this could crank out data quicker and better than a university or govt lab where there is so much red tape and the work is often done by grad students and post-docs.
[...]
The large bone is from Dave Paulides since he has put that out publicly and another from Mike Rugg since he has also openly discussed it. We also have samples from Peruvian mummies. That is also not a secret. The other samples though have not been discussed in public so they have to remain anonymous at this time.