Dr. Melba Ketchum May Have Discovered an Extinct Species of Giant Lemur That Weighed 500lbs (Updated) 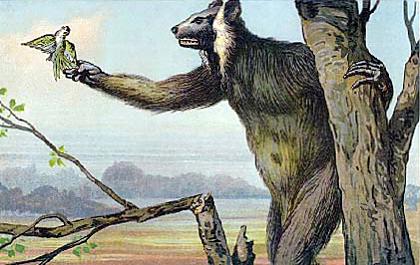 Can male lemurs breed with humans? According to Ketchum, a 400-500 pound lemur may have bred with a human female to create a hybrid species. This hybridization took place about 15,000 years ago and the theory is that a human female mated with one of the "hairy giants" and gave birth to a new lineage of hominins, a mitochondrial "Eve" for what we now call the Sasquatch.

If this is true, this may also give credence to the Sasquatch-Giant Sloth theory where some believe Bigfoots are closely related to the prehistoric sloths of South America. Giant gorilla-sized lemurs, such as Madagascar's extinct Palaeopropithecus kelyus, have a tree-hopping motion that resembles that of South American sloths. Like gorillas, they can move from branch to branch using all four limbs, with their head hanging downwards.

Did Ketchum discover a new species of lemur that's 7ft tall and capable of mating with humans? Steven Steufert posted this conversation he took from Ketchum's Facebook page:

Linda Moulton Howe: DO YOU HAVE ANY INFORMATION ABOUT WHAT WOULD BE THE CLOSEST OF KNOWN PRIMATES TO THE UNKNOWN HOMININ MALE PROGENITOR?

MELBA KETCHUM: It's headed a little more towards the lemur line, oddly enough. It is definitely NOT an ape. And it's interesting that we found out that there is an extinct lemur that weighed 400 or 500 pounds. Also, they had opposable thumbs and hooded noses. It really freaked me out that we had lemur. I did not expect that (laughs).

"Insane. She is implying that some kind of lemur could have bred with humans. Right there you know they have made a fundamental error somewhere. It simply is not possible."

[Update] The source of the statement came from a recent interview with Dr. Ketchum titled, "Is Sasquatch A Hybrid of Homo sapiens sapiens and Unknown Primate?"

[Update] Here's the interview via Earthfiles: