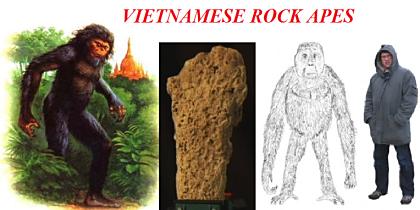 I am glad to say that here, at the Bizarre Zoology blog, I have the chance to add to the growing list of documented reports of cryptozoological animals. The latest cryptozoological report which will be going on file on this blog is from a man who I had personally met and spoken to. At the Cabela's Strange, Rare and Unusual Sightings Seminar in West Virginia, my dad and I sat behind a man (named Bob Lennox) who told us about a bizarre encounter which he had as a soldier in Vietnam. Mr. Lennox was very open and generous with telling us about his encounter, and he explained that it was this encounter which had brought him to the weekend event. His encounter was with an animal which his fellow soldiers referred to as a "Rock Ape." I have received full permission to share his report, which will also be added to the Cryptozoological Report Files page on this blog. Here is Mr. Lennox's report:

"My story begins when I was in Vietnam 1971. I was on post, which means I was alone with my k-9 out in the jungle at night. My dog's name was Teko. My job was to report any activity at night in my area, and report it back to base. One night while I was on post, sticks were being thrown through the bush in my area. My dog only looked in that direction and did not alert (which is what he was trained to do). He would alert to an animal differently than he would to a human. Teko not responding at all puzzled me, and made me kind of nervous! I don't remember how big the sticks and stones were because it was very dark in the jungle at night, so I really never got a good look. But it is hard for me to believe that a small monkey could throw things through the thick bush. Whatever it was it didn't want me there. After talking to Dr. Meldrum that day at Cabelas, he informed me that, based upon his studies, there are no large apes in the Vietnam area. But to date, there have been three animals thought to be extinct found alive in Vietnam. I wrote to a few of the guys who were stationed with me there, and I am enclosing their comments—From Bill Diorion: "I remember that they used to throw stuff at us. Bomb dump is where I remember them being located. They made a lot of noise going through the woods, and someone once told me it was because of mating season. Not sure if that was true."