10 Days of Bigfoot: Photo of Creature From Extreme Expeditions 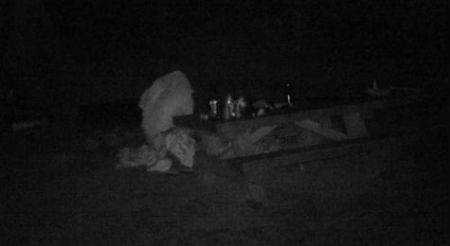 Here is #7 of our "10 Days of Bigfoot" videos we're posting until the year 2012 ends. While we wouldn't necessarily label these videos as our Top 10, they are all quite interesting to watch.

The image above is a snapshot of a creature captured on a game camera. Bigfoot researchers, Lori Simmons, Andrew Sanderson, and world renowned monster hunter, Adam Davies of Extreme Expeditions claim the photograph was taken near a hot-spot in the North Cascades National Park back in September 2012 during one of their "Extreme Expeditions" trip. The photo was released to the public a month after the image and film clip were sent to Jeff Meldrum, professor of Anatomy and Anthropology at Idaho State University and to Ian Redmond O.B.E., a field biologist for investigation.

The image and accompanying 1 sec film clip was taken by a trail camera in the team’s camp at approx. 02:30 on Tuesday 4th September 2012 in the North Cascades National Park, Washington State, an area renowned for Sasquatch activity.

The team spent two weeks in the area and although they experienced a plethora of “associated” Sasquatch activity, rock-throwing, screams, unexplained noises, they objectively could not say what these incidents were caused by. The image, however, shows an unidentifiable object situated between an extinguished campfire and two team members who were sleeping outside unaware.

The image and film clip were sent to Jeff Meldrum, Professor of Anatomy and Anthropology at Idaho State University and to Ian Redmond O.B.E., a field biologist for investigation. Despite thorough analysis they have been unable to come to any conclusion on the evidence presented – but neither have they disregarded it as fake or immediately explainable.