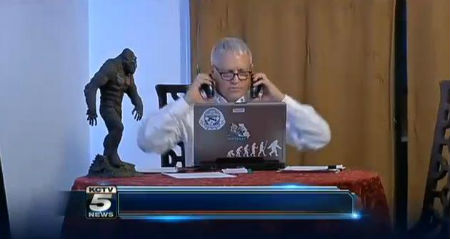 During the 1970s, Ron Moorehead and Al Berry recorded hours of vocalizations purported to be those of a family of Bigfoots from a remote location in the Stanislaus National Forest, above Sonora California. The tape contained a series of disputed audio recordings of the alleged chatter of Bigfoot. This recording is famously known as the "Sierra Sounds".

One day, Nelson's 12 year old son (like most 12 year old boys) wanted to write a school report on Bigfoot.

As he was at home, clicking around the various internet links trying to do "research", this 12 year old came across some alleged Sasquatch talking known as "Samurai Chatter" from the "Sierra Sounds" recording.

Scott immediately recognized these recordings as language (since he was a Cryptolinguist) and was totally blown away.

Nelson was recently featured on KCTV5's "Faces of Kansas City" discussing his discovery. Watch below: