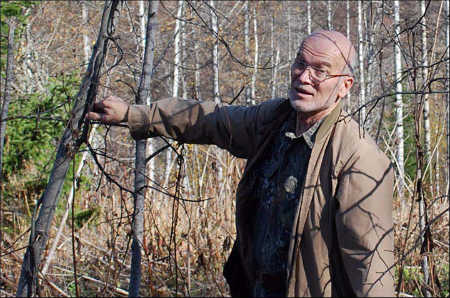 We mentioned a few days ago that we have grown weary of anything Bigfoot related that comes out of Russia, especially if it's coming from the Russian government. Officials there have been known to make wild claims of Yeti evidence hoping that it would attract more tourists to the Siberia area. The latest claim they're making now is that their labs have confirmed that DNA tests of the Yeti hair found by Dr. Igor Burtsev have all come back as being from "a human-like creature which is not a Homosapien yet is more closely related to man than a monkey".

According to professor Valentin Sapunov of the Russian State Hydrometeorological Institute:

“We had ten samples of hair to study, and have concluded that they belong to mammal, but not a human, and not the animals known to the area where they were found, like a bear, or wolf, or goat, or any other animal,”

“It was a branch of our university in St Petersburg that carried out a DNA test, and the Zoological Institute of Russian Academy of Sciences. The tests were performed by laboratory of electronic microscopy and laboratory of molecular genealogical classification.”


Here's the problem with this latest claim by the Russians. Not even Dr. Igor Burtsev, the main Yeti man in Russia, believes what he's hearing from officials. In the Siberian Times, he made the statements, downplaying the "results":

"I doubt that they have indeed managed to carry out a DNA test on Azasskaya Cave hair, and doubt that they found how close the Yeti is to humans by its DNA," he was quoted as saying.

"It has not been done anywhere in the world. I take it that they've worked with electronic microscopes, but have they compared it to other samples? I am not sure. So I am rather sceptical about Valentin Sapunov's conclusions."