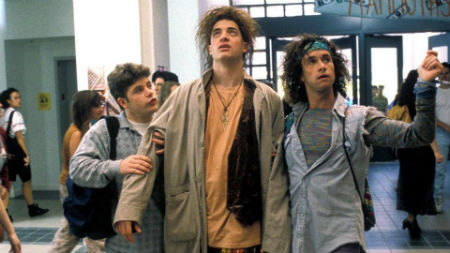 Brendan Fraser played a Neanderthal in this 1992 movie.

The film gained a mostly negative reaction from critics. It currently holds a 17% rating on the film review site Rotten Tomatoes. Despite the low rating, the film was a box-office success, with an intake of over $40 million. Its budget was only $7,500,000.

The film is called "Encino man".


If you're among the audience that has gone to "Wayne's World" over and over and rented the "Bill & Ted" movies 100 times each — "Encino Man" is for you.

This is sort of "Wayne and Garth Meet Caveman Lawyer." ("Saturday Night Live" fans should get that.)

Sean Astin (who seems to be getting chunky in his post-adolescence) and Pauly Shore (yes, he has that same MTV persona) are a pair of high school seniors looked upon by the rest of the school as hopeless nerds. But one day, while digging a swimming pool in Astin's back yard, they come upon a frozen caveman (Brendan Fraser, who is quite ingratiating).

Seeing a possibility for popularity, they dig him up, thaw him out and then try to integrate him into modern teen society. Soon they have enrolled him in school as an exchange student. And he repays the favor by helping them become cool.

This is every bit as insipid as it sounds, but it's also surprisingly innocent and has a most unexpected sweetness. There are some chuckles here and there for adults, but on the whole this one is strictly for teens — and the teenagers sitting around me seemed to be truly enjoying themselves.

"Encino Man" is rated PG for mild comic violence and a couple of profanities and vulgarities.