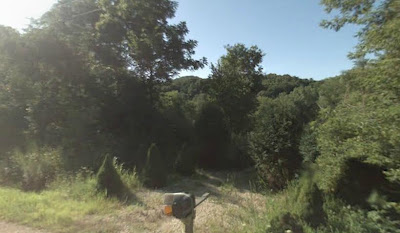 The following report is the reason why we believe there's a 9' tall hairy bipedal hominid in North America. A father and his son were out fishing 9 days ago (September 21) when they were visited by three Bigfoots. One Bigfoot got as close as 50ft from the fishermen and another one stopped to watch them at a distance of about 75ft. According to the fishermen, the figures started to scream and grunt and it sounded like more were on their way to the location.

This is one of the creepiest reports we've read about this year and with this being so recent, we recommend that serious researchers punch in the following GPS coordinates: 42.514765,-90.842826 which takes you to a public access area in Dubuque County, Iowa.

Here's the BFRO report, submitted by the witness on Friday, September 21, 2012:

OBSERVED: I took my son Myles fishing behind Sundown Mountain ski resort. We turned west off of Asbury road on to Twin Springs Drive, where there is access to the stream. I had been promising my son some night fishing. We sat on a couple of buckets facing south, to the rock out cropping and wooded area across the creek. We were fishing in the deeper water across the creek near the rocks.

We heard sticks breaking and rustling which I assumed were coons, as this is a good coon area. Then we noticed something larger coming toward the other side of the creek from a distance. Thinking that this is one of many deer that we often see, thought nothing of it until we caught sight of it in the back-light of the city or moon from the other side of the hill we were facing. This was a large bipedal animal, very unlikely to be a person, this time of night without a light (although we were fishing without a light source also). It came up to the top of the rock out cropping direct across from us and stood between two trees. It then squatted down and just sat there watching us. My son was scared, and I was intrigued. Within 10 minutes another came to join the first to his right and stayed just across a ravine. No more than 6 minutes later another came from the south, just to the left of the one squatting across from us. As this one got close, it let out a piercing shriek. Nothing like the calls that are heard on the TV shows. This was high pitched and frightening. The other two took notice and began to move toward the shrieking Squatch. At this point we had had enough and grabbed our fishing gear and ran back to the truck. The GPS location is as follows: 42.514765,-90.842826

ALSO NOTICED: More were coming.
OTHER WITNESSES: Two witnesses. We were fishing
OTHER STORIES: Nothing that we took seriously.
TIME AND CONDITIONS: Between 7:50-8:30 - occasional sprinkling of rain, dark with a bit of back light from over the hill
ENVIRONMENT: Hard wood forest, creek bottom

On a Friday evening a father and his ten year old son were fishing on a small creek across from a rock face at the bottom of a hill in a large valley.

Map of the area:

It was just at dusk. They had walked in and were sitting on five gallon buckets, with their lines in the water. Sticks were heard cracking on the bluff side of the creek. There was a half moon lighting the sky and the two could see up through the trees. A silhouette of what the father thought was a guy walking through the trees could be seen. The figure looked large, and seemed taller and broader than a man. It came toward the creek and suddenly stopped dead and side-stepped behind a tree. It then took another side-step to a position between the two trees just above the bluff in the center of this image, taken from the vantage point of the witnesses, and squatted down. 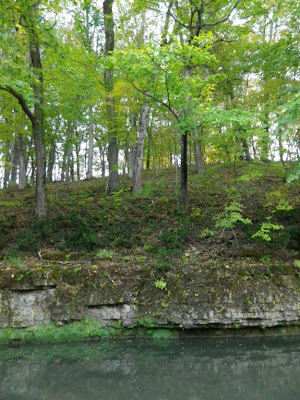 The father didn’t say anything for a bit, not wanting to scare his son. His son said “Do you see that?” The father asked the boy what he thought it was. The son answered “Its a sasquatch.”

Close-up of the two trees where the first figure squatted to watch the witnesses fishing: 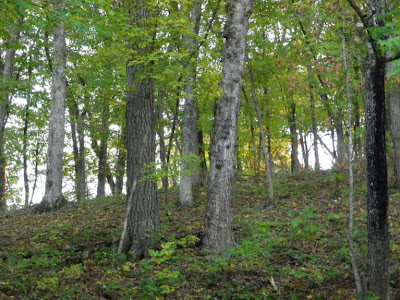 The two sat quietly talking for a few minutes and then noticed more movement toward their left, coming from the same direction that the first figure had come.

The second figure came from this area, to the left of the first figure. Image taken from the vantage point of the witnesses. 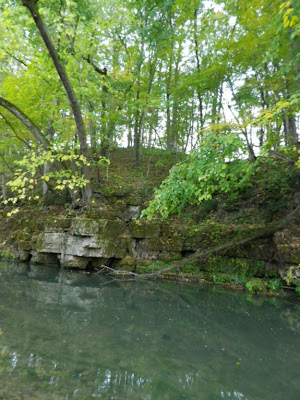 Close-up of the area where the second figure entered: 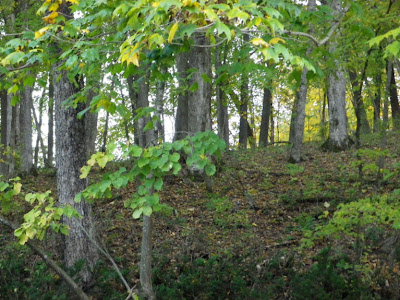 There is a ravine that comes down to the river there, and the father thinks the figures were headed for that. The second figure also stopped, leaned against a tree and was quiet. Then from the right, further up the hill a third figure could be seen moving through a clearing or open field.

The third figure entered from the right, image taken from the vantage point of the witnesses: 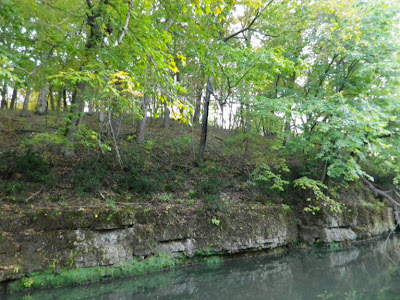 The father and son got a really good look at the third figure. This figure was smaller than the other two. It took a few steps inside the woods and then let out two piercing screams. As soon as the first scream stopped echoing down the valley the second scream was heard. When the third figure screamed the first figure responded with a guttural grunt and then both of the closer figures got up and walked toward the third figure. It was at this point that the two fishermen decided that it was time for them to leave. They were back at their truck by about 8:20 or 8:30 pm.

The figures took long casual strides when moving, with big long arm swings. The eyes could not be seen of any of the figures.

When I spoke with the son he said that he was confused when the first figure walked up, but then got a better look and noticed what it was. At that point he got scared. He described the first figure as being tall and wide with broad shoulders. The second figure he described as being the same size as the first. The third figure was not as large, but looked similar to the first two. He said that he wouldn’t go back to that place at night.

The father said that he didn’t feel in danger. The menacing feeling wasn’t there.

The father returned the next day and took several GPS readings of where the figures were, and also took photographs. He reports that he has talked his son into returning at night, and this time they are taking a camera. He said he’s “got the bug.” He and his son will both be joining me on a private expedition in the near future. I interviewed both the father and son on telephone, and found them to be very credible and observant witnesses.