Don't Give Up On Facebook Find Bigfoot Yet, The FLIR Video Exists But You Can't See It 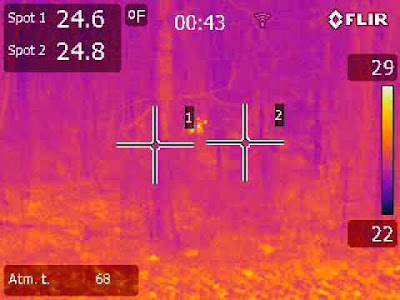 Look. We know many of you are disappointed with FB/FB's latest video. Steve Kulls took great offense to the hype they created and went as far as questioning whether the whole thing was a hoax. Let's be clear about this. The video released last night obviously wasn't the thermal footage we wrote about two weeks ago. According to Steve's conversation with FB/FB representative Adam Bird today, a thermal footage does exist, but they're not planning to release it anytime soon.

The video that was hyped the week previous was not the one displayed last night, so if my use of the word “hoax,” was over the top, I apologize.

But it’s how A LOT of us felt last night. “Over hyped” may be a better term at this point now that a clarification has been made.

But in a Facebook conversation with Adam Bird, he tells me this,

“Steve I’ve seen the video that was promised on the 10th and FBFB did not release it last night nor will it be released for a while and that is because one of the two owners do not want it released. That video is a F.L.I.R film.” - Adam Bird 9/25/12

Well, we’ll wait and see if the FLIR video lives up to the wait, personally I hope so.

Now back to our regularly scheduled programming.