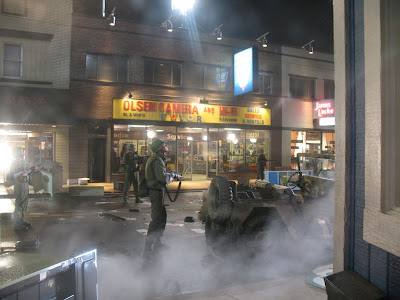 In the late 90's early 2000's, a science teacher named Thom Powell picked up on a story by an anonymous government employee who alerted the Bigfoot Field Research Organization (BFRO) about a 7.5 feet long/tall burn victim with "multiple burns on hands, feet, legs and body; some 2nd and 3rd degree burns". According to the story, on August 6, 1999, Battle Mountain, Nevada, exploded into several simultaneous range fires in what would be known as the Battle Mountain Complex Fire. A Bigfoot was hurt in the fire according to an anonymous government employee. The story was later dismissed but the acclaimed author and science teacher believe it really happened and that the whole story was an elaborate cover-up.

It has been years since the story broke and still no one has come forward to claim it actually happened-- until now. Running a Bigfoot blog, we get some strange emails every once in a while. This morning, we received an email from someone who claims to be a former National Guardsman, saying he was there and he saw the Bigfoots. This person gives a detail account of the experience that he and four other guardsmen had with the creature and all were told to keep quiet about it. We know how much some people like to pull our leg, so, as always, we'll let you be the judge:

I was reading some of the stories about Mt. Saint Helen on the message boards and wanted to share this one. I only ask that you withhold my name.

I was a National Guardsman at the Mount Saint Helen site and this is the first time I have ever spoken about what I saw firsthand. I lived in Spokane, Washington and was 24 at the time this all took place.

I have read some of the other stories and they only tell part of the story.

I was placed on a special cleanup crew farther up the mountain. A large tent was set up and it was be guarded by armed soldiers who were not part of the guard. There were numerous soldiers on the scene that were not members of the guard.

We were given a briefing by soldier who said that “after he spoke to us, we would forget about him and what he said at the end of the mission”. This was strange as we never dealt with anything before.

Myself and four other guardsmen were told to follow a group of soldiers and not to speak to each other and to remain very quiet overall. We were told to get into a jeep and wait. We sat in the jeep for maybe a half hour. Eventually another jeep arrived carrying a civilian and another member of the military.

The civilian was brought into the tent and he emerged a few minutes later followed by a large hairy creature. It looked like a large man covered in fur and the best way to describe it was like “Beast” from X-Men only brown.

The creature looked to have some burns and had a bandage on its arm. At first we were afraid but when it walked by we could see its eyes and it just looked very sad and somber. He climbed into the back of a pickup with the civilian and the two were speaking in a weird language I had never heard. It would cough at times.

The same thing happened at the next area but this time there was a response to the sound. After a few minutes two soldiers emerged from the cave carrying a badly burned creature just like the one with the civilian. The creature bent down next to it and looked it over for about five minutes. It then spoke softly with the civilian. It turned and walked back to the truck and we were told to follow as we were walking away we heard a shot and we knew it was one of the soldiers putting the creature out of its misery.

There was no response at the third or fourth site but at the fifth there was another return sound to the creature. This time it was different and soldiers carried out a creature with a badly burned left leg. We were then ordered to all help get a very large stretcher from the truck and to help place the creature on it and carry it back to the truck.

We then immediately returned to the base camp. The creature was carried into the tent while the other creature and the civilian spoke. We were ordered to stay in the jeep until we were to be debriefed. As the creature turned to walk into the tent it looked at us and made a waving gesture with its hand. We took it as a thank you for what we had done.

By the time we were ordered out of the jeep we were all in shock. We were called over to an area to be debriefed and it was just strange. I will never forget what was said because it was just not what was expected. I thought I would hear “You took an oath and now you need to live up to it for your country with a threat also implied. A different high ranking soldier just said “look, do you all really want an explanation? You saw what we were doing. These creatures live in these areas; they mean no harm and want to be left alone. Do you really want to do anything that may cause them trouble? They are like us in a lot of ways. If you need or want to talk about this just wait about 30 years, by that time there will likely be no reason to keep them a secret”.

We were then ordered back to the guard camp because “they were breaking it up so nobody saw too much and knew everything that happened”. We did not speak of it and after a few months I just took the attitude that these things live out there and honestly my life is no different because of it. I only bring it up now because people have been writing a lot about MT. Saint Helen and I believe that the whole story should be told.

I will also say this. I like to camp and hike and have done so many times throughout the Northwest. Every time I would look for signs of these creatures, tracks, listen for sounds etc. I never saw or heard anything other than what I did that day on Mt. Saint Helen.