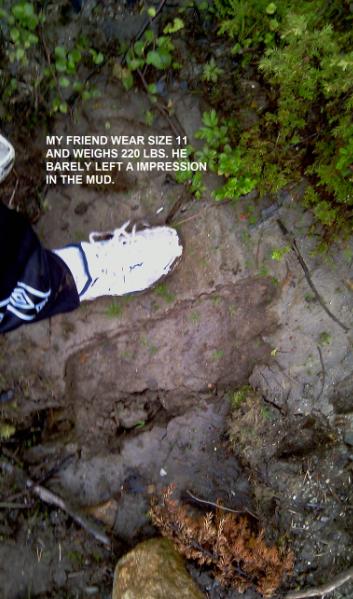 In the Old World, they do have a Bigfoot type creature that has been lurking in the woods for centuries. These beings have their own particular folklore and legends. According to legends, a troll is a giant that is never entirely in our world and as such can never be clearly photographed or videotaped. Any image taken would necessarily be blurry.  Even if a troll stood 10 feet away, their picture would be an indistinct blur.

This photo was sent to us from Findi in Norway about three days ago and we're releasing them now to see what you think. Findi referred to this print as a possible troll foot print. "I think it looks just ridiculously big, but who knows, maybe trolls are real? The other small holes/tracks on the picture is made by sheep or deer," Findi wrote. 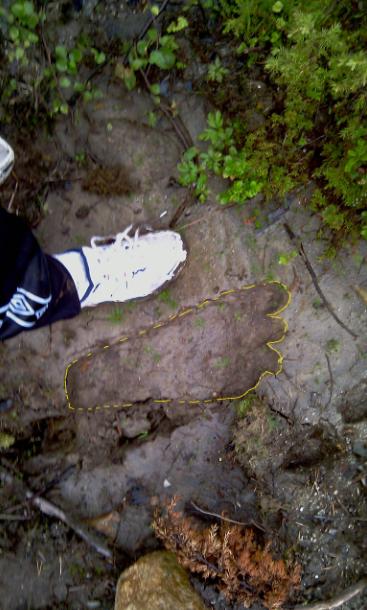 [Update: Here's what Findi wrote to everyone he sent the photos to.]

Hi!
I found this. It's pretty weird. The weirdest thing is that I found it pretty much in a pretty remote place and it's in NORWAY.. What do you think? Me and my friend were walking and we suddenly saw this ridiculously large track. I don't know what to make of it, could easily be a hoax for all I know. Biigfoot is not a big thing in Norway and I have never heard of them being here so it's pretty strange.

As I pointed out in the picture, my friend is a big guy, 6'4-6'5 and 220 lbs. He did not leave much of a mark in the sand/mud. If it's actually real this thing would be ginormous.

If you post it here or want to use it in any way I would like to not be mentioned by name, please. I would like to remain anonymous to avoid getting attention about it. I don't want my name mentioned with it. Just thought I would pass it along to you guys.