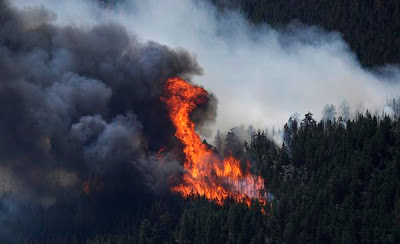 It's been a while since we've taken a comment out of the comments section and reposted it as an article, mostly because only a few are worth mentioning. If you've been paying any attention to the recent news lately, the Colorado wildfires are ripping across the foothills neighborhoods of Colorado Springs and destroying everything its path, including animal habitat.

The following comment by an anonymous reader has got to be one of the best rumor to come along in a while, even if it's B.S. That's why we're going to put up a poll and see how well your B.S. meter works:

I figure that there are probably a few true researcher that read this blog so I'll let you in on some info I just received. I have a fellow BF researcher friend that lives in Colorado Springs, Colorado. He sent me an email informing me that they had found a Bigfoot near an area where one of the fires had recently passed through. They rescued it and took it to one of their houses and have it in the garage. They are doing everything they can to keep it alive, but he said it doesn't look like it's going to make it. He also said that they'll be holding a press conference tomorrow at noon, regardless of whether or not the creature survives. This guy is one of the most honest researchers I know so it looks like it's about to happen. Get ready to eat some crow skeptics.

Ok, I'm the OP of this report. What I said in my original post is the extent of what I know about this situation. I can't comment on it any further because I don't know any more than what I've said. The whole story as relayed to me shocked me when I first read it. It sent chills down my spine. I can't say for certain it's true, but I've known this researcher for five years and have been on two expeditions with him. I can't say I know a more stand up guy. I've tried to reach him on his cell and through email replies, but got no response. The email I got was also sent to five other people so hopefully one of them will chime in.


[Update:] We meant to write down Timmy, not Jimmy

[Update #2:] An Update From The Colorado Springs Burnt Bigfoot Story, Conference At 3PM?