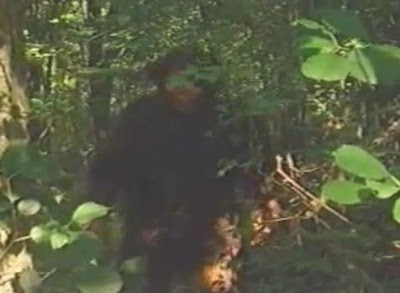 Jack Bindernagel here, I mean John, that is. This clip from a show called "Creepy Canada" features none other than the real John Bindernagel talking about his favorite subject. It's a brief clip from a Canadian series that aired from late 2002 through 2006, covering various subjects in the paranormal genre. (Maybe some day good ole Bigfoot can shake the paranormal stereotype he is branded with.) Unfortunately, it is an incomplete segment and ends abruptly, but this portion is the only part uploaded from this particular episode. It begins with an experience by a hunter and his son, and shows a sketch made by the son. Some of you may recognize the fairly popular sketch, but this segment explains the story behind it. I don't know what was up with the show's budget, but the Bigfoot costume used throughout has to be one of the worst that I've ever seen.

Another witness story is profiled regarding the waterside sighting of a Bigfoot carrying a duck in one hand and a stick in the other. The two girls also had their description sketched. The drawing is of particular interest, as it reflects a very human looking face, plus the addition of the stick and the duck it is carrying makes for a fairly unique sighting report. Another sighting by a couple of clam diggers who spotted a sasquatch and departed post haste after being pelted with rocks and sticks is depicted.

As Bindernagel begins to discuss purported sasquatch vocalizations, the video ends. But it's still has some interesting eyewitness reports and sketches that make it worth the 9 minutes. This program is another production from the OLN (Outdoor Life Network), the same network that "Mysterious Encounters" aired on. Thanks to 'xzoneradiotv' for uploading the partial segment from "Creepy Canada".