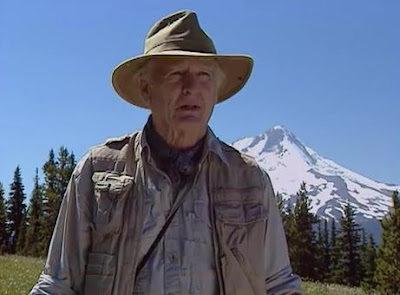 Just a heads up for folks planning to attend the Ohio Bigfoot Conference this Sunday, or for those itching to go but haven't bought tickets just yet. Famed Bigfoot and Yeti researcher Peter Byrne will be making an appearance and is scheduled to speak. The former big game hunter turned sasquatch enthusiast is a legendary personality in the world of Bigfooting.

Born in Ireland in 1925, Byrne is tagged one of the original "Four Horsemen of Sasquatchery", a title assigned by the award winning documentary, Sasquatch: The Odyssey, alongside equally legendary colleagues John Greene, Rene Dahinden, and Professor Grover Krantz. Dahinden and Krantz passed away in 2001 and 2002, respectively.

Here is information about Peter Byrne's scheduled speaking engagement and ticket information for the Ohio Bigfoot Conference from the MansfieldNewsJournal.com.

CAMBRIDGE -- Peter Byrne -- a legendary adventurer, big game guide turned conservationist and seeker of bigfoot -- will be a special guest at the Ohio Bigfoot Conference at 1 p.m. Sunday at the Pritchard Laughlin Civic Center.

Byrne, who served for the British in World War II, made India his home for decades and developed an interest in the yeti. This interest culminated in a multi-year expedition in the Himalayas financed by Texas oil baron Tom Slick, who eventually convinced Byrne to organize an expedition to seek the sasquatch in the Pacific Northwest.

Byrne is founder of the International Wildlife Conservation Society. Other speakers at the event will include wildlife biologist John Bindernagel, surveillance and technology expert Bill Dranginis, and Believe It Tour sponsor Mike Esordi.

Bigfoot related merchandise will be for sale and attendees will be entered for door prize drawings.


Henry May put together a brief tribute to the fabulous free thinking four in honor of their groundbreaking contributions in the search for Sasquatch.