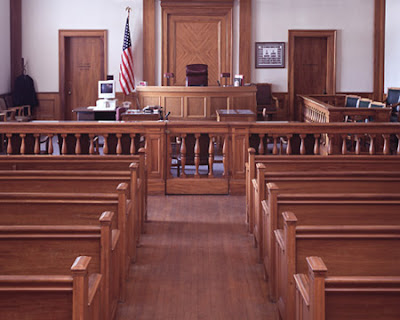 A Florida man who attended a 2005 BFRO expedition in the Ocala National Forest just filed a lawsuit against Cryptomundo and BFRO President, Matt Moneymaker. The plaintiff's name is John Johnsen. According to the filing:

Here's what was posted on Cryptomundo by Coleman on June 10th, 2011, according to the lawsuit paper:

Is the truth out there, or is it hidden in the forest known as argumentum ad hominem?

Okay, sometimes it is necessary to read folks' comments straight from their own brains to try to comprehend the basis of their thoughts. Without editing (except for typos), without moderation, and raising them to the level of a blog entry, here are the thinking, moniker-labeling, and debating that is oocurring between the BRFO's Matt Moneymaker vs Grendel Film's John Johnsen.

Stay tuned for next Sunday-Monday, after the next installment of Finding Bigfoot, for more examinations of the series. But in the meantime, take a look at the continuing interactions between these two gentlemen as freely sent for publication to Cryptomundo. But remember, the comments expressed in these exchanges do not reflect the opinions of this blogger, the founder/owner of Cryptomundo, or the management. They are shared here for educational purposes into the thoughts of these individuals.

I find it hard to sympathize with you over the editing practices of Discovery Communications. It seems that you were once part of another show that started out just fine , then fell victim to "reality tactics" to gather more viewers. That show was Mysterious Encounters on the defunct OLN. Autumn Williams was an original cast member and under the first producer/director the show had promise, in my opinion. But a short time into the first season, you appeared. And, according to my personal phone conversation with you, you were assigned the task of creating friction between you and Williams. That, and the tactics of the new producer, stole every bit of the credibility that show had. You were a part of that, sir, yet now you are playing as a "victim" of editors at Animal Planet. Pardon me if I don't buy that! I had a personal experience with you and the BFRO in the winter of 2005 in Ocala Florida. You invited me there, but although I signed the quasi·Legal forms required, you never asked me for a dime, which, frankly I didn't expect as I was under the impression that the BFRO was a volunteer service organization. Prior to that experience I would have given you the benefit of every doubt. But, after witnessing the mismanagement (in my opinion) of that expedition and listening to several people who confided in me the fact that they felt "ripped Off" it dawned upon me what you and your BFRO were really after. Money, sir, not the truth. I can produce a witness that was told by you on an expedition, after he offered alternate explanations for sights and sounds, that he was "bad for business" and asked to leave. So if you want the people here or anywhere to hold anything you say as the truth, perhaps a soul searching is in order. What goes around comes around, sir. Perhaps the worm has started to turn.


Here's what Moneymaker wrote about Johnsen:

The colorful, middle-aged, paranoid schizo from Tampa who calls himself "wildlife photographer" on the GCBRO board, and who recently made a paranoid lunatic film about the "massacre theory" of the Patterson footage ....and who also scared so many attendees at our Florida 2005 BFRO expedition with his bizarre behavior and who later went on the GCBRO message board and confessed his frustration about attending that BFRO expedition because he went there in order to shoot a bigfoot (!!!) but his plans were foiled by our "mismanagement" of the expedition ... mismanaged in the sense that he wasn't kept informed when were heading out from the campground ...

Again, consider the source . .. this is the same fellow who made the absurd amateur conspiracy movie claiming that Patterson actually killed a whole family of bigfoots .. , The evidence: patches of soil in some parts of other footage from that trip look reddish, so they MUST be dried pools of blood ...of course, yeah.

I actually wrote up the whole long version recently for the BFRO describing exactly what Johnsen did on that Florida expedition, and all about his radio troubles, and how I brought everyone around to his camp site when I heard about his complaining. I brought them all to his camp site to prove to him in front of everyone else that his radio wasn't working properly, whereas all the rest of our walkies-talkies could connect just fine .... But even with that purposely humiliating demonstration ... he just turned redfaced and lashed out that there's nothing wrong with his radio and it's brand new, and that problem is with MY radio (the one I just did a test-demonstration with).

Everybody kinda looked at each other after that and said .... whoaa ... this guy is not in the same reality as the rest of us ... perhaps we should leave him to his own devices, which we subsequently learned included
firearms.


Click here to see a copy of the complaint via Cryptomundo.

Cryptomundo has proceeded to set up a legal defense fund. You can read about it here.