How Likely Are You to See Bigfoot? 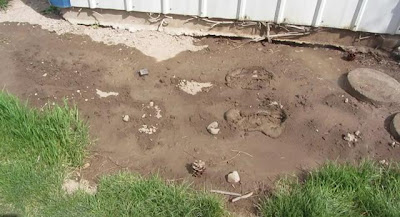 According to these rough numbers by Carl Olinselot, it's very unlikely that you'll ever see a Bigfoot. Hold your horses-- he's not saying that these creatures don't exist. Carl says the 84 million acres of National Park tells us that there are plenty of land for Bigfoots to remain undetected.

Here are the rough numbers from Carl:

If all the people visiting parks in a month all went at the same time and spread out among the acreage there would be 3.6 acres per person.

More realistic: If approximately 10% of those people went deep into the forest and secluded areas all at the same time (as opposed to staying on roads and tourist locations) equally spread out among acreage: 36 acres per person.
Things to consider:

The percentage of visitors to National Parks that actually venture off the beaten path is probably much less than 10% due to park regulations. This drastically increases the acres per person ratio which also increases the possibility of a Bigfoot avoiding detection.

Most National Parks are closed 6 months out of the year due to snow and temperature dangers providing half a year of open travel without interference.

These estimates do not factor in all the hundreds of thousands of acres that aren’t classified as National Park land, but are still highly secluded with little to no human visits. These estimates are also only for the United States. Factoring in the open wilderness of Canada easily multiplies these figures tremendously.

Even with rough guessing it is easy to see that there is more than enough acreage available for a creature or animal to thrive undetected and undiscovered by humans. These numbers don’t factor in the possible intelligence and physical ability to hide and avoid human interactions.