How The Honey Island Swamp Monster Was Hoaxed 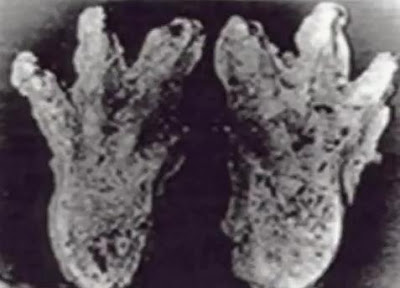 Several weeks ago we posted a story about the Honey Island Swamp Monster. Part of the dvd set "Bigfoot is Real" includes a segment investigating the legend. M.K. Davis and Jay Michael took a trip to the Honey Island Swamp in Louisiana in 2003 in order to get stock footage for the documentary detailing the legend of Harlan Ford's sighting and film of a Bigfoot like monster said to be inhabiting the area. Many track castings of a strange clawed print were also lifted in the 1970's.

But the men came back with a very different story after chatting with the locals of the region. Bigfoot naysayers will enjoy a little satisfaction with what they found regarding the legend. Traipsing through the heavily mosquito infested swamp area in the middle of the West Nile outbreak, a few locals surprised them with the declaration that the whole affair had been hoaxed. Relatives of Harlan Ford confirmed that a shoe was found with a clawed molding attached to its sole allowing a human foot to impress the strange prints into the muddy ground.

Davis and Michael were stunned to hear this and set out to find out more. After speaking to a woman who says she took the shoe to a show and tell presentation as a young child, they eventually locate a man who has it in his possession. The video shows footage and photos of the shoe and explains the clever crafting process that actually fooled anthropologists who had examined the castings. I recall a line from a past National Geographic special entitled "Is It Real?" wherein a skeptic makes the statement, (paraphrasing) "I think people often underestimate the cleverness and resourcefulness of hoaxers." So I suppose the only thing to say in this case is the old saying...if the shoe fits, well, I guess the shoe fits.

Watch the video to see the shoe and a description of just how it was crafted. The men compare it to the castings and explain how they confirmed a match between them. Although the conclusion doesn't necessarily mean there is no such creature living in the mucky remote regions of the swamp, it does reinforce the integrity of Michael and Davis. They 'fessed up to what they found, afterall, or as they state in the credits, 'they slayed the dragon'.

The last 15 minutes show you the grainy footage of their originally planned documentary and the discovery of the phony shoe as it happened.