When Matt Moneymaker Tells You Facts Like, Some Vehicle Collisions With Deer At Night Are Caused By Bigfoots, You Should Believe Him 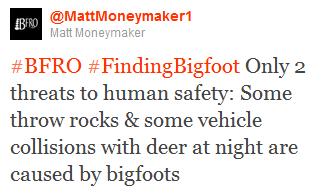 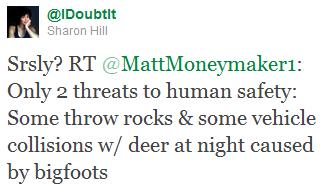 When Matt Moneymaker posted the above message on Twitter, many people thought he was joking.

"Well that's interesting, I see deer road kill all the time. Not once has Bigfoot come running out to get his prize. Deer do lots of silly things at night when lights are in their eyes.  I've also seen deer run in to my path for no good reason. When one goes, the rest follow," wrote one of our commenters.


As it turns out, Matt had good reasons to believe that some animal collisions are actually caused by Bigfoots. Here's the latest BFRO report submitted February 12, 2012. This one involves a tow trucker driver while loading up a vehicle that crashed into an elk.

OBSERVED: It was last winter 2010-2011 at about 1:00am. I was out on a wrecker call north of the Missouri River about a mile. I was loading a car on to my truck when I heard a deep grunt. I turned with my flash light and looked behind me and almost 100 feet behind me was an up right walking creature dragging the dead elk that the car I was towing had hit down the side of a hill. It was about 40 below zero I was cold and scared so i loaded up and got back to town.

ALSO NOTICED: The creature was dragging the elk with one hand. No human i have ever known could do that. It was a light brown. if there was no snow it would have blended in to the environment very well.

I spoke to the witness tonight and he gave a clear description of what he had witnessed. He stated that he had to fill his truck before leaving Malta, MT. to respond to the call of a car hitting an elk which came in around 11:30 - midnight. We are not completely sure about the date, and neither was the tow truck driver. We assumed during the conversation that it occurred on a Saturday night/early Sunday morning and I, the investigator, picked the 8th of January as the tow truck driver said it was not a New Years night. The tow truck driver is checking his tow receipts to see what the exact date was. We will update this report with the exact date when received. As he was leaving he noticed the temperature on the bank said it was 40 degrees below zero. When he arrived at the accident scene he met a state trooper and the owners of the car who were waiting for him with the squad's lights flashing. He then helped the trooper pull the young bull elk (3x3) off the road as it was in the middle. The trooper then took the car owners into town. The witness then backed his roll top wrecker with the lights flashing up to the car, hooked it up and began to load it. As he was standing on the passenger side of the truck operating the roll top he heard a deep grunt. He then grabbed his flashlight and looked back to where the elk was laying and saw an 7 1/2' - 8' large brown/graying hairy beast dragging the elk one handed by the antlers down the ditch into the coulees. He stated that it looked like a body builder but much larger, with broad shoulders, long arms, and a big square flat face. He said that it was hair covered (about 2"), with what appeared to be a beard that was around 5" long. The eyes were about 5" apart and reflected his flashlight in a whitish color similar to that of a deer in headlights. He stated that it did not appear to be in a hurry. It had a hold of the elk and when he shined the light on it, it turned and looked at him and continued dragging the elk away thru around 36" of snow. He said the feet never cleared the top of the snow but it did not appear that it had any problem as it drug the elk off. He guessed the encounter lasted about 15 seconds and it had drug the elk around 100 feet before he lost sight of it. He did call the trooper when he returned to town and told him what had happened. The trooper acted as if he did not believe him.

I spoke to the witness for an hour and a half. Their family has a good reputation in the community and I believe he is very credible.