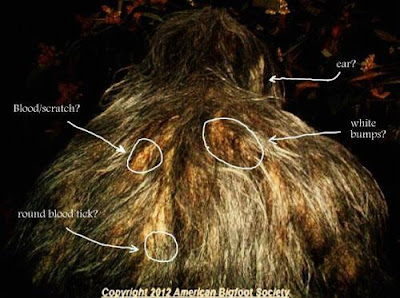 While Melissa Hovey's game cam photo is still being debated, a few witnesses who had close encounters with Bigfoots in the past are chiming in. Robert Lindsay has been taking notes and a few people have pointed out some features that only witnesses would know.

For example, some witnesses have noted what they called pointy, elf-shaped ears on the Bigfoot they saw. Robert claims that the photo clearly shows a right ear that looks rather small compared to human ears. "I have seen these elf ears before, possibly in the Hoffman video," says Robert.

Among other anomalies, Robert also spotted some sort of skin condition on the creature in the photo.

There are new high definition blow up pictures of the Melissa Hovey Bigfoot pic. They show excellent detail that seems to beyond what any costume designer would think up.

I can see the white bumps in the photo. This looks like some sort of skin condition. Perhaps someone with dermatological knowledge can chime in.

At first I thought I could see the tick, but now I can’t. Perhaps someone can point it out for me.

I saw the bloody looking sores/scrapes at first, and now I am seeing even more of them. I have heard that a lot of the older Bigfoots are pretty beat up looking. That stands to reason, I assume.

I do think that is an ear on the right. This looks a lot like the Harley Hoffman Bigfoot video. About the Bigfoots’ ears: they look rather small compared to human ears, but this stands to reason if they evolved in the north. Humans from the north have smaller ears than humans from near the equator. The smaller ears are to protect them from the cold. Some witnesses have also noted what they called pointy, elf-shaped ears on the Bigfoot they saw. I have seen these elf ears before, possibly in the Hoffman video.

The tree is a loquat tree. They are common in Florida, Texas and southern California. Hovey is a Texas researcher. It stands to reason that as she was chosen as the person to release the photo to, the photo may have been shot in Texas. Loquats have fruits that wild animals love to eat. Perhaps the Bigfoot was eating off the loquat tree. Perhaps since the Bigfoot was often seen eating off the loquat tree, a camera trap was set up to snap a photo of it while it was doing so.

There has been much speculation that this is the same costume that was used in a Bigfoot movie shot a while back called Clawed. However, I have seen the Clawed costume, and it looks nothing like this photo. I have also seen other costumes that this photo is said to resemble, and it looks like none of them.