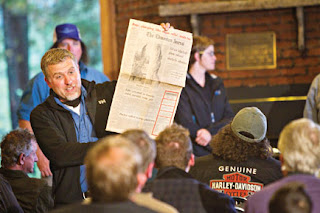 Please join us for our live blog of Finding Bigfoot: "The Best of Finding Bigfoot" episode. Blogger Autumn Forest of Ghost Hunting Theories will be joining us tonight to commentate on the episode live at 10pm PST.

Our live blogging is done. Read below.

[10:00] Shawn - The team is back in Ohio at Deerasic park Park. They're introducing themselves to the townsfolks.

[10:06] Shawn - This was when they left a live baboon out in the woods. This is the baby sasquatch episode.

[10:06] Shawn - One person raised his hand and ask if they really believed that it was a juvenile Bigfoot on the tree.

[10:07] Autumn - No baboon was injured in the filming of that episode.

[10:07] Autumn - Bobo just said they don't often jump to conclusions a sound is a squatch. HUH?

[10:09] Autumn - They're talking about the Rhode Island episode

[10:09] Autumn - Operation Giant Flush--you remember that one, with torches like they were storming a castle.

[10:11] Shawn - One lady asking how a creature that big hide in Rhode Island and not be seen.

[10:19] Autumn - No trees were killed in the filming of that Minnesota episode

[10:20] Shawn - Ranae is talking about the Todd Standing episode. Canada.

[10:20] Autumn - Ranae loved the smudge ceremony in Canada--she's probably not to be around the other smoke that might be blowing around during filming...

[10:23] Shawn - Kid question: Was the Canadian rockies a difficult place to hunt for Sasquatch?

[10:23] Autumn - Asked: Why didn't they believe Todd Standing? Because they were not smoking the same joint.

[10:26] Autumn - Cliff talks about how they have sentinels and I really believe that concept. Smart boy.

[10:31] Shawn - With all the advances in technology, why don't we have any good footage of the species?

[10:31] Autumn - So he's responsible for the upskirting on the internet?

[10:32] Autumn - So, BoBo tosses still raw bacon into the bushes, but tests a cooked piece to prove it won't make them sick?

[10:35] Autumn - They run into other squatch groups all the time in Salt Fork in OH and so the woods are "polluted" with humans.

[10:39] Shawn - Matt and Ranae arguing about the footprint in the mud.

[10:39] Autumn - Matt has had a lot more tracking training than Ranae, and he is the one who is the expert at hiding cameras and he has a theory about cows being human food...

[10:41] Autumn - Matt is about ready to backhand Ranae. I think the Wylie Coyote and the Roadrunner scenario is nearing and Matt will be shopping at the Acme factory soon.

[10:42] Autumn - Oh, yes when they used the blacklight--I'm so glad nothing glowed that might show up in a hotel room.

[10:42] Autumn - Boogeyman is the thing that lives out there that scares you - says Matt. I guess in his world, that's Ranae

[10:47] Autumn - Next week Cliff says Bigfoot shows up a lot of times in cemeteries. Well, I guess that solves the mystery of where they bury their dead.

[10:49] Shawn - It's that eyeshine episode. Ranae says it's an owl. Matt strongly disagrees.

[10:50] Autumn - Ah the fake deer, the baby doll crying--I'm waiting for them to put a large stuffed animal bear holding a salmon as a lure.

[10:53] Autumn - Best line ever on the show? Cliff: Sasquatches are real. You can see one them and not be crazy.

[10:53] Shawn - Cliff says he hopes that if it did happen, they did something positive with it. He calls killing Bigfoot an evil act.

[10:56] Autumn - Ranae has a great attitude about wanting to find evidence and find reason to believe.

[10:57] Autumn - Indiana episode they will shoot off fireworks and I'm not sure between that and the torches and driving over trees in Minnesota, that they might just be tree haters.

[10:58] Autumn - The hunter in the next episode says "I did not pay attention to its butt-tocks"