If A Bear Can Do It, Why Can’t Bigfoot? 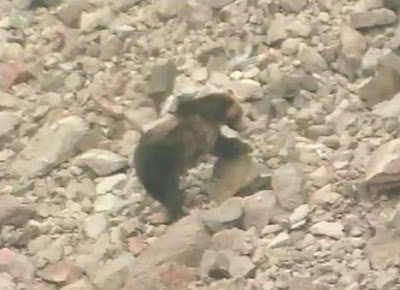 Editor’s Note: This is a guest post by Mackenzie U., a student of Environmental Conservation Studies. She believes in the possibility of Bigfoot and is hopeful that one day scientific methods will help prove its existence.

The first question people ask me when the subject of Bigfoot comes up is if I believe in Bigfoot. My answer is always no, but I do believe in the possibility of Bigfoot. This means that although I cannot say with conviction that Bigfoot exists, I believe that the North American continent has plenty of areas that can support a creature such as Bigfoot. If you have watched the show “Finding Bigfoot”, you’ll notice that the evidence of bears makes a place automatically “Squatchy” in their eyes. Though it may seem like a rush to judgment, the bear rule is actually a pretty good one when you realize what it takes to keep a bear happy in his habitat. Since California is home of the famous Patterson and Gimlin film, I’ll use its bears to explain the logic behind the bear rule.

The history of bears in California is a fascinating one. Less than a century ago, California had two species of bears that covered most of the state. In the mountainous regions, California black bears were the bear du jour while the California grizzly bear (AKA California golden bear) called the foothills and valleys home. The tenacity of this bear and its preferred habitat that just happened to include gold bearing rivers led to the active pursuit and extermination of this species. It is said that the last California grizzly was shot in Tulare County in 1922.

This was obviously bad news for the California grizzly, but great news for the California black bear. It is becoming more and more apparent that the only thing keeping the black bears in the mountains was the larger grizzly bears dominating the valley region. The black bear has proven itself to be a successful opportunist that has been expanding its habitat more and more every year. Unfortunately, this has led to many bears having run-ins with humans and being thought of as a pest.

Now, how does the success of a bear correlate with the possibility of a Bigfoot surviving in the wild? It all comes down to calories. Opportunistic feeders such as bears and humans can find enough calories to keep bodily functions going relatively easily. There are berries, plant roots, other animals, and if all else fails there is plenty of insects to eat in the woods. A great example of this is the grizzly bears in Yellowstone Park that have been observed eating an estimated 20,000 calories each worth of moths per day in the summertime. The caloric equivalent at Carl’s Jr would be eating 9 Western Bacon Six Dollar Burger meals with large fries and Oreo cookie shakes. I’ll take Carl’s Jr over moths any day, but if I was trying to survive in the woods for any length of time, grubs would become my new cream puffs.

Now, I don’t claim to be a nutrition expert but I think it is safe to assume that if Bigfoot does exist, its caloric needs would fall somewhere between the average man (2,000 calories) and a bear (20,000 calories). Put that together with the information that California alone has habitat capable of supporting an estimated population of around 30,000 black bears and it becomes easy to conclude that the same habitat could potentially support a Bigfoot population as well. If a bear can do it, why can’t Bigfoot?


The tiny army cutworm moth is a vital source of the mighty grizzly bear's diet.