From the Anthropological Armchair: What side of the camp are you on and why? 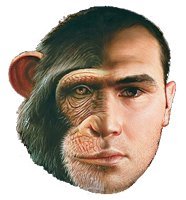 Editor’s Note: This is a guest post by Josh Brown, Anthropology Major (Physical) from Sacramento CA, and CEO of "Skye Highland Outfitters".

Alright you all- I think it is high time we have a reader participation discussion here, inviting all view points concerning the current debate. Is Bigfoot more human, or is it closer to ape? Now we all know that scientific/anthropological nomenclature and current hominid evolutionary paradigms are difficult for a majority of people to understand. If you present a theory as to your opinion on this subject, please keep it as simple as possible so the majority of readers can follow along and participate. There is no reason for anyone to "dumb down" their ideas to get the point across, just take the time to explain any "jargon" that may be confusing.

I'm going to start off this discussion by reaffirming my personal opinion that Bigfoot is a hybrid creature that seems to exhibit traits of both human morphology as well as those of apes (In this instance, we will refer to "Apes" as Gorilla, Chimpanzee, Orangutan and Gibbon). I detailed in a posting back in October 2011 of how I came to this conclusion (Please refer to it for full details of my theory).

Three traits that came to mind from my post were:


A) Sasquatch seems to have "Sclera", or have eye whites that show the same way that humans do. Apes do not have this feature.

B) Footprints that have been gathered have the same design as human, meaning a similar foot bone structure. There is no divergent big toe as observed in Ape and Monkey populations.

C) Ability to communicate via speech and the use of tools for rhythmic signaling.


These are all traits that we also share (making a human connection seem logical), yet there are traits that are apelike as well:


A) Sagital crest (This is a ridged bone that runs along the top of the skull so muscles can attach themselves to power large, strong jaws)

B) Ape-like face and features

So you see that the 2 polar opposite sides have very strong evidence for their opinions. What are yours and why?

NOTE: I want to point out that Dr. Meldrum spoke with me via email and made one of the most compelling statements concerning the Bigfoot being a sect of Homo Sapien. He basically said "Where is the stuff?" He is absolutely right in the sense that Modern Human and our direct ancestors have left telling signs and tools proving their existence and ability to grasp the aspects that have propelled us evolutionarily speaking. What has Bigfoot left? Do "nests" count?

He also was quick to point out that "Sclera" and "Divergent Toe" are not what make us human, although I have to think there is something to my opinion since we, as humans, are the only primates to exhibit these traits.

OK- Start weighing in on your opinions and why. If you see a statement that deserves questioning, make it. Be fair and be kind to everyone's ideas. Let's get a consensus as to what people think about this and why. Start now-