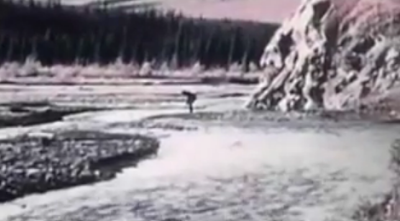 This story is really about a Missouri couple's encounter with Bigfoot 14 years ago. But what we read in the following article blew us away.

After their encounter in William R. Logan Conservation Area  near Lincoln County in 1997, Robert and Cynthia Stayte became avid Bigfoot researchers. The couple took a trip to Oregon and Washington, visiting the sites of several reported Bigfoot encounters. One report was from a young Oregon kite salesman who claimed he and his father found a dead Bigfoot lying in a mountain stream.

“They heard a sound and turned around,” Cynthia said. “There was a live Bigfoot in the trees just a few feet away, watching over the dead one. They turned and ran out of there.”

Frightening growls and snapping twigs were all it took to put a normal St. Charles County couple hot on the trail of the legendary Bigfoot.

Robert and Cynthia Stayte said they had never given Bigfoot much thought until their personal encounter with the unknown on July 27, 1997.

“It affected me more than it did my husband. I can’t let it go,” said Cynthia Stayte, 46.

It was a hot, late afternoon when the couple drove to a lonely alcove of the William R. Logan Conservation Area in Lincoln County, 10 miles north of Troy, on Highway 40-61.

The couple parked their car at the top of a hill and walked down toward a lake, said Robert Stayte, 49.

“We were told there was some good fishing in the lakes up there,” he said.

At the bottom of the hill, the couple stumbled upon an unusual footprint.

“It looked like a human footprint, but quite large. I’ll never forget the big toe. I told my husband it could be a Bigfoot, but I was just joking,” Cynthia Stayte said.

The couple dismissed the print and continued toward the lake. They were observing the surroundings when they heard heavy branches snap.

“If you spend a lot of time outdoors, you hear animals moving in the brush. It’s not that rare. I didn’t think much of it until we heard heavy breathing – heavier than a horse. It caught my attention,” Robert Stayte said.

“It was like a human, only 1,000 times magnified,” Cynthia Stayte said.

The breathing seemed to be coming from something right next to them.

Then the growling began.

“It was a snorting sort of growl, like gorillas in the zoo,” Robert Stayte said.

“They were snarling grunts, very deep and guttural,” his wife said. “I turned to my husband and asked him if he heard it.”

The Staytes began running up the hill to their car. Robert Stayte took the lead, his wife said.

“I never had anything scare me like that before,” her husband said.

The Staytes do not match the image of a couple “on the fringe.”

Robert Stayte is a TWA avionics technician. Cynthia Stayte is a dental assistant. But after their frightening encounter, they became Bigfoot researchers.

“When we got home, I got on the Internet and found a Bigfoot database,” Cynthia Stayte said. “I clicked on Pike County, which is near Lincoln County. Sure enough, there were sightings listed.”

Further research uncovered a history of Bigfoot sightings in Louisiana and Cyrene County, she said.

Hoping to network and acquire more information, the Staytes attended a meeting of the Mutual UFO Network (MUFON).

Bruce Widaman, MUFON state director, said he was impressed with the Staytes’ story.

“Everything she told me sounded true and legitimate,” Widaman said. “I don’t think there was anyone at the meeting who didn’t believe her. She has credibility.”

Widaman said he has documented many Bigfoot sightings in Missouri, especially near the Cuivre River.

“I think there really is such a thing as Bigfoot,” he said. “Perhaps we’ve had one or two come through Missouri, traveling along the waterways.”

Bigfoot was dubbed “Momo,” short for “Missouri Monster,” after a rash of Missouri Bigfoot sightings during the early 1970s.

As for the Staytes, their search continues.

In September, the couple took a trip to Oregon and Washington, visiting the sites of several reported Bigfoot encounters.

They spoke to a young Oregon kite salesman who claimed he and his father found a dead Bigfoot lying in a mountain stream, Cynthia Stayte said.

“They heard a sound and turned around,” she said. “There was a live Bigfoot in the trees just a few feet away, watching over the dead one. They turned and ran out of there.”

While eating breakfast in Seaside, Ore., the couple mentioned to their waitress they had just visited Saddle Mountain.

Cynthia Stayte said the waitress gave her a funny look.

“She said locals don’t go to Saddle Mountain. I asked her why. She hesitated, looked around, then quietly said…Bigfoot.

“They were scared of Bigfoot. She and her husband had seen a Bigfoot standing by the side of a road at 2 a.m. about three years ago. She said it was big and it was real.”