Bigfoot Skull in Walla Walla turned out to be human 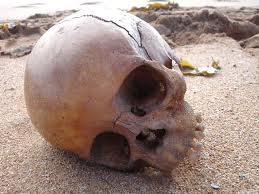 
URGNT: Need a phys.anthro'gist in Walla Walla 2 exam a skull found in mts. Photos avail. Def. primate, might B human.

And two days later, on July 25, Moneymaker sent out another tweet:


Meldrum says Walla Walla skull is human, but possibly native. We've directed the finder to take it to the local sheriff's office.

At the time, there wasn't much information to go by and the messages gave little on the exact whereabouts and what the context was. A Google search on "Walla Walla Bigfoot Skull" didn't turn up any leads to what was going on in the Walla Walla area. That was a few week ago.

Now we know what really went down in Walla Walla County earlier this month. According to the Seattle Times website, Authorities are investigating a human skull discovered by two hikers in the Umatilla National Forest earlier this month. The hikers initially thought was a skull belonging to a Sasquatch. A statement from the Walla Walla County Coroner said they had actually taken it to somebody who is supposed to be a Sasquatch expert and he handed it back and said it looked human to him. The website didn't specifically mention who was the Sasquatch expert the hikers brought the skull to, but if we had to guess, we'd say it was Dr. Jeff Meldrum.

Here's the story from seattletimes.nwsource.com:


Skull found by hikers is human — not Sasquatch

WAITSBURG — Authorities are investigating a human skull that was discovered by two hikers in the Umatilla National Forest earlier this month.

According to Walla Walla County Coroner Richard Greenwood, the hikers found the skull in the Deduct Pond area, off Tiger Canyon Road in Oregon.

The hikers may have initially thought the skull belonged to a Sasquatch, Greenwood said.

"They had actually taken it to somebody who is supposed to be a Sasquatch expert and he handed it back and said it looked human to him," Greenwood said.

One of the hikers, a Waitsburg resident, then informed the Walla Walla County Sheriff's Office about the discovery.

Deputies recovered the skull this weekend, then turned it over to the coroner and alerted Oregon State Police of the case.

Troopers recovered the skull from the coroner earlier this week.

Members of the Confederated Tribes of the Umatilla Indian Reservation were notified of the discovery, as was the Umatilla County Sheriff's Office.

Greenwood said the Umatilla County Sheriff's Office reports having at least three different unsolved missing-person cases that may fit within the vicinity of where the skull was found.

The investigation was taken over by officers with the National Forest Service, who declined to comment due to the case being an open investigation.