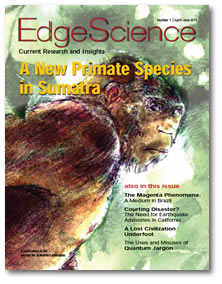 Orang Pendek on the cover of EdgeScience,
published by the Society for Scientific Exploration 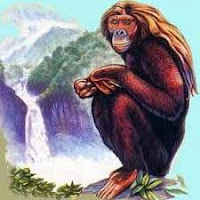 EdgeScience recently declared Orang Pendek as a new primate species. Adam Davies has published an article making the case for the orang-pendek of Sumatra and neighboring regions as a new species of primate.

In the EdgeScience magazine #7, Adam writes: 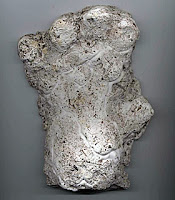 "But a serious consideration of the scientific evidence for the orang-pendek points in two directions at once. The structural analysis of the hair suggests either an orangutan, or something very closely related to an orangutan. The DNA analysis, on the other hand, points to a human or something very closely related to humans. But why can’t it be both?"

Some details about the Orang Pendek:

A Brief History of Orang Pendek:

"Orang Pendek" literally means "short person" in Indonesian. This is the name given to an animal that people have been seeing for hundreds of years in and around Kerinci-Seblat National Park in central Sumatra.

Orang Pendek is described as an ape, about one meter (three feet) tall, with a strong chest and arms, short hair covering its body,that walks bipedally.

The animal has allegedly been seen and documented for at least one hundred years by forest tribes, local villagers, Dutch colonists, and Western scientists and travelers.

Sightings by locals often take place in farmland on the edge of the forest, where Orang Pendek is allegedly seen walking through fields and raiding crops (especially corn, potatoes, and fruit). Locals with experience in the forests claim that Orang Pendek seeks out ginger roots, a plant known locally as "pahur" or "lolo", young shoots, insects in rotting logs, and river crabs. The Durian fruit is also thought to be a favorite of the Orang Pendek.