Is Bigfoot a Woodwose? 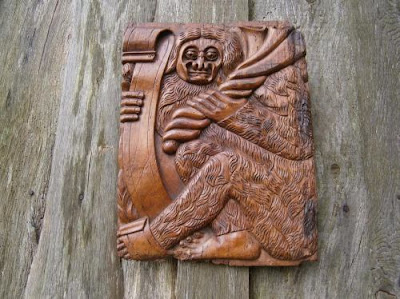 A medieval myth talks about a hair-covered man that carries a club and steals children. Were they talking about bigfoot?

The woodwose, or wild man of the woods, is a mythical figure that first appeared in medieval Europe - covered from head to toe in thick hair and carrying a club, the curious creatures began to appear in English churches during the 12thcentury, carved into fonts, spandrels and roof bosses in precisely the same places where you'd find their close relative, the Green Man. Although terrifying in appearance, the woodwose is often seen fighting lions or dragons, both of which were considered a threat to humans, and it was widely believed that the woodwose would scare away evil spirits.

This did not, however, prevent them from also becoming like medieval bogeymen who could be used as imaginary behaviour monitors for wayward children - in art depictions, the woodwose's club sometimes included a child tied to it. And children had every right to have nightmares about the woodwoses: according to some legends, they had superhuman strength, were deaf to the word of God and some would think nothing of snatching a child and eating them.