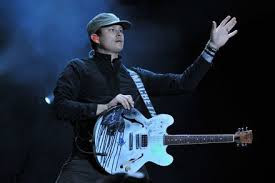 Former member of Blink-182, Tome DeLonge, is well known for his interest in the UFO phenomenon, but former band mate Travis Barker says DeLonge would go on bigfoot outings during tour.

"[DeLonge] would even go as far as when we were on tour [to be] like, 'Let's go...look for Bigfoot,' whatever it was," Barker says. "And he would assemble a crew and they would go do it."

Barker clarifies that he would never join DeLonge on his Bigfoot adventures -- "That was just too fairy-tale for me," as he puts it -- but he does say that the two would often look outside the bus window for UFOs together.