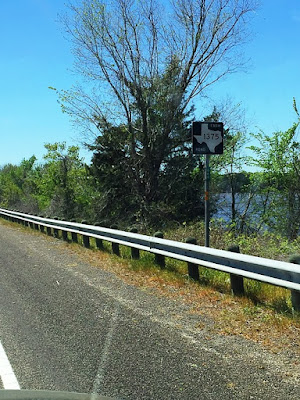 The Sam Houston forest in Texas is known for the many bigfoot sightings that occur there on a regular basis. The Lake Conroe area is also another known hot spot for these creatures, so it's no surprise that a sighting report would come from this area. A man and wife separately spotted a large bigfoot type creature an hour apart on a bridge that crosses Lake Conroe. Check it out:

Witness Observation
At approximately 0500 on January 4, 2016 I was traveling to work on FM 1375 heading east towards I-45. As I was approaching the river bridge I saw a reflection of eyes from the bridge and thought it was deer eyes. As I got closer the eyes were approximately 7-8 feet high. Then I noticed the body of this "thing." It was huge. I have spent many a year in the woods and I have never seen anything like this. When I first saw it I thought it was a person or maybe a bear standing on its hind legs. But by its size alone it was clear it was not a person.

Time and Conditions
5:00 am - Dark and clear skies.

Investigator's Comments
Daryl G Colyer, Shannon Graham, and Shannon Mason
This investigation was conducted as a result of an incident that allegedly occurred in Walker County, Texas in January 2016.
I interviewed the primary witness at length about his reported observation and I also interviewed his wife, the secondary witness. Shannon Graham and Shannon Mason went onsite and conducted a comprehensive examination and search for trace evidence. I assessed the primary observer as a clear-headed, straightforward individual who believes that what he saw cannot be attributed to any known animal or person. His wife also struck me similarly. The observers live in a nearby town and they both clearly communicated to me that they had never given any thought to the subject nor did they have any prior knowledge that such a thing was even possible, particularly in areas near where they live. Nowadays, when they travel by vehicle, they are constantly on watch, hoping to see something similar again.

The first and primary reporting witness told me that he was on his way to work and he was approaching the west end of Baker Bridge (the bridge over Lake Conroe on FM 1375); he was driving east. The time was approximately 05:00. He first observed a pair of reflective eyes that he initially thought was likely a white-tailed deer. The eyes were on an animal that was directly up ahead actually on the pavement on the right side near the guardrail. As he drew nearer to the actual subject, he began to realize that the reflective eyes were of some other kind of animal that was massive and upright. Its color was dark, either “black or dark brown.” The hue of the eyes was very similar to that of a white-tailed deer, with a greenish tint that seemed almost bluish.

As the observer drove by the subject, he swerved over into the opposite lane; the subject watched the witness, and the witness watched the subject, as the witness drove by. The witness was overall stunned by what he had just seen, but the size and thickness of the subject truly impressed him: He estimated its height to be at least seven feet and possibly as tall as eight feet. He told me that what he saw was absolutely not a human in an ape suit; the size alone disqualified a human as a possibility, not to mention the sheer lunacy of someone who might attempt to hoax such an act. After he began to process what he had seen, for a second the observer contemplated turning around and shooting the subject. He was certain the subject was not human.

The reporting witness's spouse was equally as certain that what she saw was no human. The husband did not call anyone or talk to anyone about what he saw as he continued on to work. About one hour later, his wife called him and told him that she had seen something "really strange" on her way to work as she crossed the Lake Conroe bridge on FM 1375. She too was heading east across the bridge.

As she drove out onto the bridge, she saw up ahead a very large figure that she at first thought was a person jogging across the bridge, clearly seeing arms and legs. She described the subject as very large, black in color, and seven to eight feet in height; it was facing east with its back to her as she drove toward it and then passed it. She never saw it from the front and never saw reflective eyes. The subject was actually out on the bridge, and it was her impression that it was walking east crossing the bridge from west to east. She was in a small car and she had to look up at the subject as she passed it, coming to within “10-15 feet” of it as she passed it. Like her husband, she too was stunned.


For the full report, and photos of the location, click here.