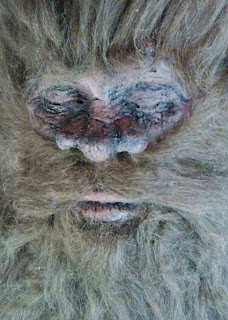 Here it is folks -- Hank, modeled after a character from Lord of the Ring. This is supposedly the "Bigfoot" Rick Dyer claimed to have shot. In 2008, Rick Dyer tried to hoax the world by saying he shot and killed a Bigfoot, but his entire plan to take the body on a tour was brought to a grinding halt when Squatchdetective Steve Kulls exposed his fake Bigfoot-in-a-freezer. It's now 2014 and Dyer is pulling the same strings, but this time, he's moving full steam ahead regardless of his "Bigfoot" being a cheap knockoff of a dwarf from Peter Jackson's Lord of the Ring.


In 2008, Dyer was caught trying to pass a costume loaded with real meat as being a dead Bigfoot