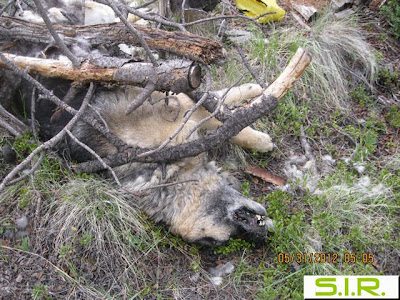 By now, you've probably heard all the stories about what happens to dogs after a Bigfoot encounter. The Bigfoot Chicks recently posted a story from North Carolina where carcasses of several canines were found near some large 13-14 inch, five toed tracks.

Just last month, we posted a photo (above) by Jeff Y. of a german shepherd that was supposedly found buried under some logs over Memorial day weekend. According to Jeff, the area had been a hotspot for Sasquatch activity and the most recent were some hand prints of a baby Sasquatch found the near campsite. "There were other signs that the campers had problems. We have 2 small hand prints from different times in this area that points to a baby Sasquatch in the area. The dog probably got too close to it," Jeff said.

In 2010, a North Carolina “Mountain Man” named Tim Peeler claimed he had an encounter near the South Mountains State park with a 10-foot tall Sasquatch with "beautiful hair" that was trying to attack his dog. Peeler said he probably lured the Sasquatch to him when he was using a game call to find coyote.


Here's another case of dogs allegedly being murdered by Bigfoot. 40 years ago in Louisiana, MO, people came from around the nation to help search for a mysterious beast called the "Momo". In July 11, 1972, it was reported that at 3:30 pm, Terri and Doris Harrison were playing in the back yard when they saw a "big hairy thing with a dog under its arm." They ran in the house, looked out the window and saw the creature standing in the ditch. It was about 7 feet tall and stinky. It ran on two legs they reported to Police Chief Shelby Ward. The report was carried in the Chicago Sun-Times July 21, 1972 and in the Los Angeles Herald Examiner. Here's the story from the Southeast Missourian, published on July 15, 2012:


LOUISIANA, Mo. -- The Sasquatch-like creature stood tall like a man, cradling a dead dog under one arm and growling. The stench was horrific and sickening. Then the creature darted back into the rural Missouri woods.
Or, none of that happened and teenagers punked the world.

Either way, for a couple of weeks 40 years ago, Louisiana was the center of attention as people came from around the nation to help search for the mysterious beast. People in this town are still debating whether the creature dubbed "Momo the Missouri Monster" really existed.

"I've been a hunter and fisherman all my life and I've never seen nothin'," said Bill Hoaglin, 61, the town's streets superintendent. "But who knows? They've seen things like that in many other places. You never can tell."

The Momo saga began on July 11, 1972. The Harrison family lived in a house along what was then known as Marzolf Hill. On a hot summer day, 8-year-old Terry Harrison and his 5-year-old brother, Wally, were chasing their dog through the woods.

Suddenly, 15-year-old Doris Harrison, who was inside, heard her brothers screaming, ran to the window and saw a creature she described as perhaps 7 feet tall with dark hair covering its face. It held a dead dog under its arm and blood -- apparently from the dog -- flecked the dark hair of the beast. And, ooh, that smell!

"Something you'd never seen before?" she was asked.

From there, a mix of fear and curiosity spread.

Another woman in the neighborhood reported hearing animal noises. A farmer said his dog disappeared. Maybe Momo took it! Soon, others were reporting smells, sightings of dark objects in the night, bizarre screams and cries.

"We heard it a few days later," Bliss said. "It was a roar. I've heard bobcats and other animals and it was nothing like that. My dad just started hollering, 'Y'all better go! It's coming!'"

Reports of encounters began to pile up. A man claimed he was chased by a big hairy beast with red eyes. School kids said they saw it from their classroom window. Two women picnicking near the river said Momo chased them to their Volkswagen, then displayed the humanlike intelligence to try and open the door before a blast of the horn scared it away.

Soon, Momo was a national phenomenon. News crews and other curiosity seekers found their way to Louisiana, a town of 3,300 residents about 80 miles north of St. Louis.

"It's not human at all," Windmiller, 41, said of the print that's about as long as a human's, but much wider. "It has a big heel and three toes."

Despite the plaster evidence, Windmiller doesn't believe Momo was real. Neither does Priscilla Giltner. The retired teacher, now 76, is certain a trio of high school boys pulled off a major hoax.

By Giltner's account, the boys fashioned a homemade monster suit they used only sporadically. They made the curious noises, planted the fake footprints, concocted the putrid smells.

"I don't think they planned for it to get as big as it did," Giltner said. "They were just bored. They didn't have anything else to do."

If they're responsible for the hoax, they've kept it to themselves.

"I will never, ever, tell their names," Giltner said. "That's their secret."

Sasquatch-like sightings have been reported in many states, but most commonly in the Pacific Northwest.

Jeff Meldrum, professor of anatomy and anthropology at Idaho State University and author of "Sasquatch: Legend Meets Science," said while no one can be certain about the existence of Momo, he believes some mysterious species exists.

"I'm trying to convince my colleagues that there is substantial evidence that there is something out there which could stand to be one of the most significant discoveries of this century," Meldrum said.

"To find a huge primate species in our own backyard that could be more humanlike, that would really be something."

Eventually, things returned to normal in Louisiana, though there have been occasional reports of other Momo sightings. The ordeal spurred a country song and for many years Louisiana hosted a "Momo Days" celebration downtown.

Today, there are no physical reminders. The Harrison house has been razed. Murals on the walls of downtown buildings depict the river, the bald eagles that nest in the area in winter, the gorgeous bluffs that surround the town. But no Momo, except in the memories of longtime residents, even skeptics like Giltner.

"There are people who think of Momo and they have fond memories," she said. "Let them have them." 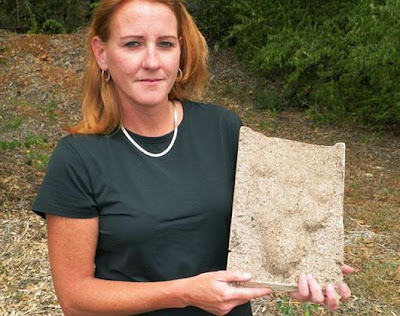 This July 11, 2012, photo shows Christiana Windmiller holding a plaster footprint made by her father purportedly left by a Sasquatch-like creature in a garden in Louisiana, Mo.