All Bigfoot All The Time 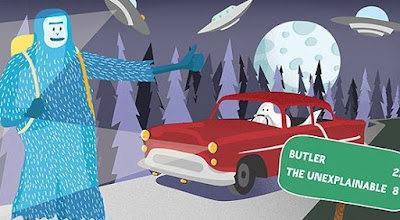 The Butler Paranormal Conference is here, and provides a haven for believers to meet.

After 34 years investigating paranormal activity, Brian Seech claims he can always spot when people are withholding a good story. He cites an experience he had with audience members during a speaking gig at a Bigfoot conference in Fayette County.

“I said, ‘How many here have claimed to see a Bigfoot?’ About four or five people put their hands up. I said, ‘Well, you can double that, because I almost guarantee there’s another ten or twelve people that aren’t going to raise their hands,’” he says. “And you start scanning the audience and see the looks in people’s eyes or see them talking … some of them will come up to you later and say, ‘You know what, I did see this.’”

Seech and his wife, Terrie, are affectionately known as the Mulder and Scully of Beaver County, a title they earned after years of conducting research through the Center for Unexplained Events (CUE) and the Center for Cryptozoological Studies, groups they founded to investigate reports of UFOs, aliens, ghosts, and cryptids.