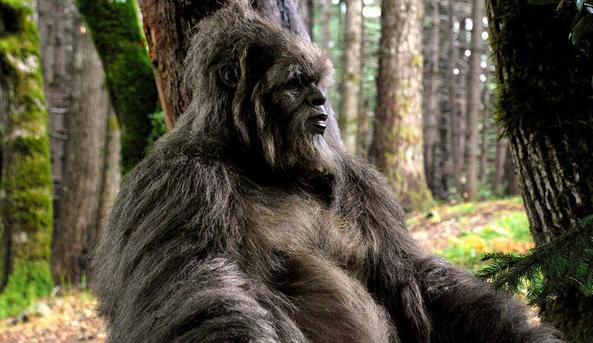 We can tell you right now that this is one of those stories where we'll be asking Dred Funn to do a drawing on. The encounter seems unreal, and we're pretty sure the 20 minutes probably seemed like an hour for these witnesses. This happened about a year ago, and it's probably very fresh in their minds. One thing really interesting is that the witnesses think they may have a photograph of the Bigfoot that was sitting on the log. Very interesting, right? Here's the report:

LOCATION DETAILS: Withheld due to sensitivity.
NEAREST TOWN: Nehalem, OR
NEAREST ROAD: Tillamook State Forest Road
OBSERVED: Large, upright bipedal animal covered in dark-brown or black hair. The creature sat on a log, got up, looked up at us, and seemed nonchalant.

ALSO NOTICED: We were able to observe him for 20 minutes at least!! He had sat down and would stand up and watch us. He would turn left as watching to the left then turn back to us again. Then he turned right and took a couple steps, watching something else. Then again turn back to us. We could see him holding something in his right hand. He never held it in both, that I could see. I would be happy to speak to anyone about this if anyone has questions. I KNOW what we saw. Both my cousin and I are experienced in the woods and are hunters. We know our animals. This was not a bear. He stood almost the whole time and when he did sit, he sat straight up. I did take pics before we seen him of where he was...he might be in them.

OTHER WITNESSES: My cousin was the one that spotted him first. He pointed him out to me but I didnt see him at first. I was looking in the wrong place. then I saw him by the way he moved. We were up there doing gold panning on another creek on another road. We decided to check out this road.


According to this follow-up investigation report by BFRO Investigator Geoff Robinson, the area is very compelling:

I contacted the witness and we went, along with a local investigation support person, to the site of the encounter.

The area is approx 1700 ft in elevation along a steep ridge and within 2 miles as the crow flies from a popular county park along a major river. We accessed the location via a somewhat abandoned logging road, and there was evidence of elk and deer scouting activity.

The location of the subject was approximately 300 yards to the creek bed below. In the topography between the subject location and the observation site, there was second and third growth Doug Fir and scrub brush. Across the valley, there were several clear-cuts in the distance.

According to the witness, using only their naked eye the subject appeared to be sitting and/or standing adjacent to a large log laying on the ground. The log was still there at the time of my investigation. With binoculars I noticed that there was a road adjacent to the clearing where the subject was observed, and on that road there appeared to be a locked gate. After inspection of an updated forest service road map, I determined that the gate was across the same road we were on, only off into the valley below.

For transcription purposes, I video-recorded the witness description of the encounter. We departed the area and I prepped the gear I had packed for spending the night on the ridge alone.

When I returned to the site it was dusk and a heavy fog started to roll in. I mounted a thermal-imaging video camera on the roof-rack of my vehicle, which was inputting to a DVR on the floorboard in the passenger compartment. I also mounted a stereo digital audio recorder with 24" parabolic microphone on a tripod and focused the parabola on the 120 degrees to the rear of my camp.

At about midnight, I began recording with both devices. On the ridge, I was surprised to learn that I had a good strong signal with my cell phone, so decided to call an investigator friend of mine, who had asked me to call if I had reception.

After about 30 minutes, I finished the call, and began hearing some light tapping noises, down the ridge toward the witness-site of the subject, and to my right and left. I began talking in a normal tone of voice in response to the tapping. The tapping appeared to be in response to my talking. I continued this for about one hour, and at one point after there was a very loud wood knock apparently from the valley below close to the original witness encounter site. The tapping sounds eventually stopped.

After another hour or so, I got into my sleeping bag in my tent and slept soundly through the night. When I awoke, the fog was heavy and I broke camp and made my way back to town for breakfast.

Upon review of the audio and video, I found both of the "conversations" I had (with the friend on the phone, and with the tapping sounds) to be intact in the audio. In the video there was one heat signature likely attributable to a large rodent, opossum, or raccoon close to the ground from behind my tent. Along this area was a steep drop-off and a game trail. There were no cast-able impressions in the substrate, which was mostly forest-floor duff.

Several days later, I returned to the area to do a daylight investigation of the location in the valley where the subject was spotted sitting on a log. The log measured 35" in diameter, apparently an old-growth cedar that for some reason was left behind from logging operations that took place most likely decades ago. With that measurement and review of the witnesses' account, I estimate the subject to be approximately 7 feet in height.

I have cataloged both audio and video footage for further study and analysis, nothing clear or significant enough to include with this report. My evidence collected from the site that night along with the eye-witness account, combined to create a compelling case for the existence of bigfoot(s) in this area and a very high likelihood that the subject the witness spotted sitting on the log was a bigfoot. I will continue to study this location and update this report.


Since we really like this encounter, we're sending our good friend Dred Funn the story and see if he can bring it to life. Here's his depiction of a "Bigfoot family":